It may be loaded with technology and top-quality trim, the Mercedes A-class is no hot hatch and rivals are better to drive 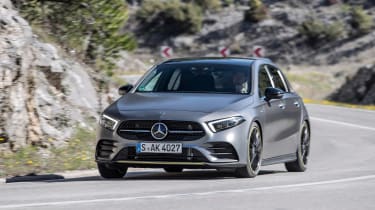 The Mercedes A-class was the original premium small car. Launched in 1997, it beat the modern Mini to the market by some four years, while Audi buyers had to wait until 2010 for the flash A1 supermini. After two not so successful generations, the third, launched in 2012, aimed its three-pointed star instead at larger, more mainstream rivals like the Audi A3 and Volkswagen Golf, in the process becoming a crucial model to the Mercedes range.

The outgoing A-class was never the sportiest do drive, but its premium badge and high-quality interior made it a big seller in the UK. The new car aims to right the old car’s wrongs, with a revised chassis, new engines and a hi-tech cabin.

> Click here for our review of the Audi A3 Sportback

Here, we drive the new A-class for the first time, in top-spec A250 AMG Line guise. Has Merc finally done enough to topple the best cars in its class? 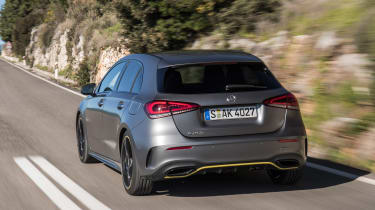 Until the fire-breathing AMG versions arrive, this A250 is the fastest new A-class you can buy. It uses a 2-litre turbocharged four-cylinder petrol engine with 221bhp and 350Nm of torque, which is good for 0-62mph in 6.2sec and a top-speed of 155mph. That makes it faster than a VW Golf GTI Performance Pack – even if it doesn’t feel it.

At launch, all cars come with a seven-speed dual-clutch automatic gearbox, although a six-speed manual will be available later. For the time being, every A-class is driven via the front wheels, with 4Matic all-wheel drive available on high spec models down the line. 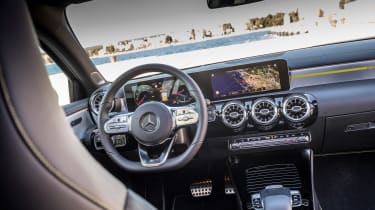 It’s clear Mercedes has focused more on comfort and quality than making the new A-class particularly involving to drive. Entry-level cars get a twist beam suspension set-up at the rear, but higher-spec models like our A250 use a development of the outgoing version’s multi-link arrangement. Adaptive dampers are not available in the UK.

While the A180 d and A250 engines are carried over largely unchanged, the mid-spec A200 is an all-new unit developed under Merc’s partnership with Renault-Nissan. Its measly 1.33-litre capacity disguises a not-insignificant 161bhp and 250Nm of torque – but if it’s performance you’re after, this A250 is a much better fit.

Inside, it’s an absolute tech fest. Every car comes with a pair of 7-inch screens, with the option to upgrade one or both to 10.25 inches. Go for the latter and you can choose features such as augmented reality satnav, which overlays images from the car’s front camera with arrows, street names and house numbers. It’s remarkably useful in practice, too. 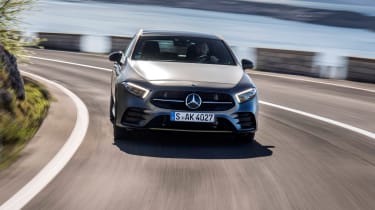 The Mercedes A-class was never the sharpest car to drive, and little has changed for this fourth-generation model. While it’s come a long way since the first-gen car’s infamous ‘Elk Test’ fail, it still seems to prioritise comfort over fun.

The steering, while accurate, doesn’t offer much feedback, and there’s quite a lot of travel in the brake pedal before the car reacts to your inputs. The seven-speed DCT gearbox is quick and smooth, however, and the 2-litre turbo engine doesn’t feel unreasonably strained under hard acceleration.

> Click here for our review of the BMW 1-series

In reality, though, those performance figures feel a touch optimistic. While the range-topping A250 is livelier than the A200 petrol, it doesn’t feel as eager as a VW Golf GTI – despite trumping it for punch on paper. Throttle response is sharp and body roll well contained, but it’s not the sort of car you’ll want to throw down a B-road.

On the motorway, the A-class is incredibly quiet and refined. Unfortunately, every car on the international launch came with adaptive dampers – and these aren’t even offered as an option in the UK. Basic models get a rather rudimentary twist beam rear axle, but all A250 models do get the complex multi-link rear suspension set-up. It works well in the most part, but deep potholes can catch the car out – sending delayed shocks through the chassis and cabin.

Despite the A-class range starting from £25,800, the A250 costs £30,240. It’s only available in AMG Line spec, and currently there’s no manual gearbox option. You’ll need to add the Premium Pack (£2,395) for the larger twin-screen set-up, and the Advanced Navigation Pack (£495) for the augmented reality satnav.

Rivals stretch far and wide, but if you want the finest handling premium hatch, a rear-wheel-drive BMW 125i is still king. The Volkswagen Golf GTI is a more complete all-rounder, while an Audi A3 comes close for interior quality. If you’re spending around £30k, feisty hot hatches like the Honda Civic Type R and SEAT Leon Cupra are within reach, too.