The A45 proves Mercedes-AMG has found the formula for not just a fast hot hatchback, but a genuinely involving one 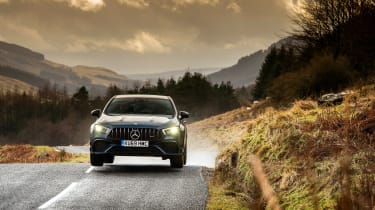 The latest Mercedes-AMG A45 could hardly be more different from its predecessor. While the two cars look similar on paper – five-door hatchback bodies, turbocharged four-cylinder engines, all-wheel drive – the new A45 now feels like a car engineered for driving enthusiasts rather than simply a very quick way of getting from point to point.

It’ll still do that too of course, and with over four hundred horsepower at its disposal, the A45 S is the most potent hot hatchback on sale. But big speed is now just one component of the A45’s repertoire. It builds on the solid progress AMG made with the A35, and the end result is one of our favourite hot hatchbacks.

The A45’s one of those cars that transcends class boundaries, too. It’s almost not worth comparing with other hot hatchbacks, given its expense (it’s more than fifty grand) and performance. In some ways, it actually makes more sense in CLA coupe form, where you might be tempted to class it as a supersaloon.

If we’ve one reservation, and it’s a small one, it’s that while the A45 does offer a more complete and engaging driving experience than the A35 below it, there really are limited opportunities to enjoy the extra performance. That makes the A35 look like particularly good value – though it’s worth remembering that it’s the A45 we brought along to evo Car of the Year 2019... 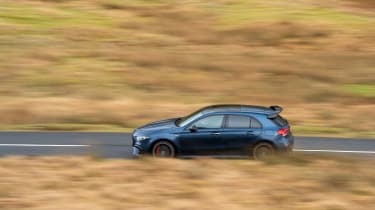 Mercedes-AMG A45 S: in detail 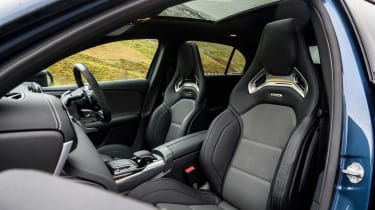 Just over £50k will get you into an A45 S – £50,595 on the road, to be precise. That’s undoubtedly a large sum of money for a five-door, Focus-sized hatchback, but could be considered a modest sum for something with comfortably more performance than most other cars at this price point. Extend it to £56,595 and you’ll be into an A45 S Plus.

The Plus brings with it standard adaptive damping, the AMG aero kit, 19-inch forged cross-spoke alloy wheels, a panoramic sunroof, full leather trim and a Burmester sound system, among other things. The glorious Sun Yellow paintwork is a no-cost option, but metallic shades are £595 extra and the Designo paints a little more than that. 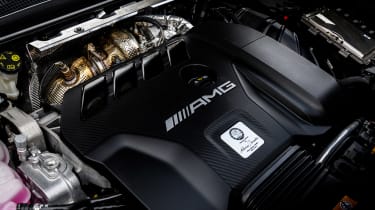 Rivals for the A45 S are currently pretty slim on the ground, at least until a new Audi RS3 arrives. Rather than looking within the realm of hot hatchbacks – most are ten grand cheaper, a hundred horsepower down and have less prestigious badges – we’d instead consider spending a similar £50k sum on a proper sports car.

That arena’s looking fairly healthy at the moment, with real diversity of choice; the new Toyota Supra, the BMW M2 Competition, Alpine A110, and Porsche 718 Cayman all start around the £50k mark. We’d note though that the Supra missed out on a finalist slot in eCoty 2019, in which the A45 S finished in third place.

The 718 Cayman is worth a look though, particularly given with a few options on an A45 S Plus, you’re nearing the £64,088 of a 718 GTS 4.0 – basically a detuned Cayman GT4. A two-door sports car is clearly a very different proposition to a five-door hatchback, but if you’re buying more for driver appeal than family-car practicality, there are few cars on sale today that can match the GTS.