The mighty Mitsubishi goes out with a bang not a whimper - just as you'd expect, really 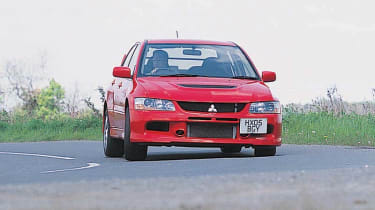 There's an unspoken understanding between journalists and photographers in this business. Photographers are prepared to sit through torrid roller-coaster rides in return for two things; patience when he's waiting for that perfect light (normally just before the sun disappears; fine in December, not much fun in July) and agreeing to take notice of those subtle 'slow-down' signs - grabbing of the seat bolster, sharp intakes of breath, etc.

This relationship usually builds up slowly, starting with a hot hatch or mild coupe and building to the full-blooded horror that is passengering in a wrung-out road rocket. So imagine snapper Nathan Morgan's sense of dread when I called to ask him to shoot the new Evo IX FQ-320. Nathan and I had never worked together before...

Mitsubishi's iconic four-wheel-drive Lancer has entered the winter of its long, hard life. For more than a decade the Evo has fought tooth-and-nail with Subaru's similarly equipped Impreza and introduced frankly startling performance to a generation of Ferrari-baiters. As the name suggests, each iteration has got just a bit faster, a tad sharper and at the same time a smidge more user-friendly. The IX may be the end of the line for the Lancer, but after a few miles dipping into its mighty performance you'll find it's hardly ready to collect its pension.

Biggest news for the IX is the adoption of MIVEC variable valve timing for the venerable 4G63 1997cc turbo motor. By matching inlet valve timing to the engine speed and load, low-rev response is turned up a notch with the added bonus of a freer-revving top-end. Couple this to a lengthened turbo tract that improves low-end torque and it's no surprise to find the Evo's power delivery is more measured and smoother than ever. You can even knock the IX into sixth at 35mph and it'll take off with barely a shudder.

The Evo VIII MR's chassis revisions, namely Bilstein dampers and Active Yaw Control that works in harmony with the Super ABS system, are carried over almost unchanged onto the IX. Only slightly lower rear springs and even further refined software for the AYC diff were deemed necessary for Mitsubishi's final fling with the Lancer Evo series. Subtle, certainly, but devastatingly effective.

Inside it's much as it ever was, with figure-hugging Recaros, gorgeous three-spoke Momo steering-wheel and a cheap-looking dash. BMW or Audi drivers won't be impressed, but when you've got the throttle pinned you never feel short-changed...

The power builds progressively from just under 2000rpm, the delivery ramping-up at 3000rpm and tearing on to 7800rpm with ever-increasing savagery. The addition of MIVEC allows you to play out the urge with subtle shifts of throttle input, and although it's still obviously turbocharged, the engine feels incredibly flexible and minutely obedient to your right foot.

It's this controlled delivery as well as a refined gearshift and more linear steering feel just off-centre that define the IX. It's not wildly better than a Evo VIII MR but all the tiny improvements combine to form a bigger gap than you'd think. And the lowered rear suspension gives surprising gains in rear body control.

Find an open corner and the Evo IX has almost surreal grip and a tip-toe poise that involves as well as impresses. The nose feels nailed to the tarmac and although the rear seems naturally to take on a tiny slip angle to keep the car on line, the AYC always seems one step ahead and carefully apportions torque between wheels to keep everything neat, tidy and driving forwards. It's trickier to actually unstick the IX as the rear feels better tied-down but I'm sure with an empty track it'd indulge with its trademark four-wheel drifts until the tyres went pop.

So it's business as usual, only more so. The Evo IX won't win legions of new buyers; you either get the mad, manic Lancer or you don't. But as the final torch-bearer of a fiercely hardcore, tarmac-chewing rally replica it's a killer piece of kit, and it'll be a sad day when the Lancer finally dies; except for photographers...