AMG’s next model is the sleek, booted CLA 45 S Shooting Brake which gets its remarkable 415bhp turbocharged 4-cylinder engine 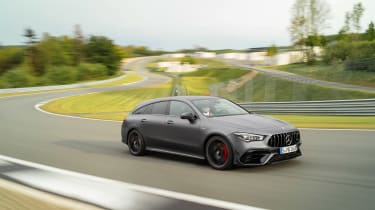 Mercedes-AMG has revealed a further derivative of its new 45 S range, with the sleek CLA Shooting Brake picking up the 415bhp M139 turbocharged four-cylinder powertrain and an aggressive AMG GT 4-Door-inspired styling.

The CLA45’s technical package is unchanged from the hatchback, with the main focus being the new 2-litre turbocharged four-cylinder petrol engine that produces 415bhp. This new powertrain features the highest specific bhp/litre output of any mass-produced engine in the world (even usurping real hypercars like the McLaren Senna) with 208bhp/litre. As with the A45, only the higher-output S model will be offered.

To keep the immensely power-dense unit cool, AMG has had to employ tech borrowed from its larger V8 engines. This includes the use of air-to-air charge coolers, separated water cooling systems for the head and block, as well as the natty ability to route the air-conditioning system back into the engine bay to help cool it under extreme circumstances. To this end, even the engine’s placement has been flipped 180 degrees, with the turbo and exhaust now on the bulkhead side of the engine, to improve cold air-flow into the cooling and intake systems.

This new power unit is connected to an eight-speed dual-clutch transmission that sends power to all-four wheels. Also borrowed from the A45 is the torque vectoring rear differential, with two twin-clutch packs that are able to divert power between the rear wheels.

Unfortunately, the slightly larger body has increased kerb weight, adding a tenth to the 0-62mph time at 4sec, but it remains an enormously impressive figure for what is essentially a compact estate car with a four-cylinder engine.

The chassis has been given an update too, with adaptive dampers fitted as standard, and six-piston front brake calipers gripping 360mm discs. The steering rack is also bespoke, all of which work within the CLA’s onboard driver modes. 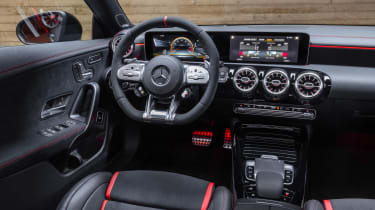 The Shooting Brake’s design is as you would expect, combining the standard CLA45’s aggressive styling with the sleek estate body. 19-inch wheels will be standard in the UK, while the interior is identical to both the A45 and CLA45 coupe, complete with the AMG Performance steering wheel with its small colour screen interfaces embedded into it.

Prices have yet to be announced for the UK, but with a price of just over £50k expected for the A45 S, we’d expect the CLA45 Shooting Brake to go over 60k when specified with a few choice options. In terms of rivals, the CLA45 S sits in a class of one, aside perhaps for the far less expensive Golf R estate, that is until you realise that both the non-S AMG C63, and the Audi RS4 start at just over £65k, which is not a huge amount more if you consider the extra performance, space and sophistication that comes with those cars.