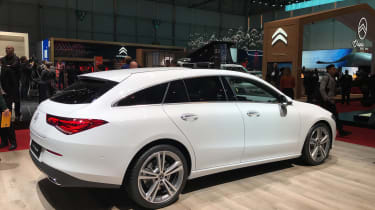 Following the launch of the CLA coupe late in 2018, Mercedes has revealed the new CLA Shooting Brake at the Geneva motor show. Based on the new CLA four-door coupe, the Shooting Brake will go on sale in June with deliveries scheduled for September. Prices will be announced in the summer.

Identical to the CLA coupe up to the B-pillar and retaining the same frameless window design, the rear of the new Shooting Brake has been designed to maximise rear interior and load space over its predecessor. Overall the new model is 53mm wider and 48mm longer with a wheelbase that’s also grown in length by 30mm.

Initially Mercedes has only confirmed the range topping 222bhp 2-litre, turbocharged four-cylinder petrol engine, fitted to a seven-speed DCT automatic. However, you can expect the same spread of petrol and diesel engines will be available in the CLA Shooting Brake as are offered in the CLA coupe. A six-speed manual gearbox will also be available, so too a four-wheel drive drivetrain to accompany the standard front-wheel drive layout. AMG is also considering the options for both CLA35 and CLA45 Shooting Brake editions. 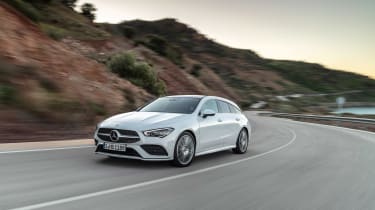 Underpinning the CLA Shooting Brake is a wider front track than its predecessor and multi-link rear suspension. Mercedes’ adaptive suspension dampers will be available as a cost option. Wheel sizes will range from 16- to 19-inches with tyres ranging in size from 205/60x16 to 225/40x19.

Despite being at the opposite end of the Mercedes product range the new CLA Shooting Brake won’t want for driver technology, with developments of the S-class’ Active Distance Assist, Active Steer Assist, Active Lane Change Assist all available across the range.

When the CLA Shooting Brake arrives in September it will be vying for customers currently sat behind the wheel of Audi’s A3 Sportback, which has previously been the better of the two. However, with the vast improvements Mercedes has made with the new A-Class, and the expected positive effect these will have on the CLA that shares much of that car’s DNA, the Sportback could finally have some strong competition in the form of the CLA Shooting Brake.