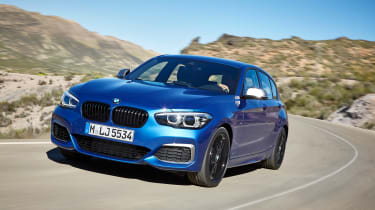 All versions of the 1 Series are powered by turbocharged engines and there's a wide choice of both petrol and diesel. The petrols were all-new for the 2017 model year: first the 3-litre TwinPower Turbo inline-six of the M140i, then the four-pot 120i and 125i.

The latter use an all-new unit that BMW is calling the Baukasten engine (at least internally - don't expect any lectures from dealership staff), which uses TwinPower Turbo technology with a twin-scroll, single turbocharger, direct injection, and Valvetronic and Double Vanos valve timing and lift. They're all two litres in capacity (available as 20i and 25i in the 1 Series, with the 2 Series coupes adding a 30i variant) and all more powerful than their predecessors. For visual differentiation, BMW has given each model twin exhaust pipes. 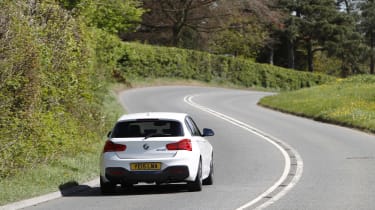 The entry-level petrol, the 1.5-litre, three-cylinder turbocharged 118i, remains in the range. It's a fine engine, to be found both in BMW's Mini range (in Cooper form) and also amidships in the futuristic BMW i8 hybrid sports car, and in the 1-series it's good for 134bhp and 162lb ft of torque - the latter developed from only 1250rpm.

Most buyers of the 1 Series go for diesel power and there's just as much choice, from the frugal 116d, with its three-cylinder 1.5-litre engine and 114bhp, to the more satisfying 2.0-litre turbodiesel units found in the 118d and 120d (147- and 188bhp respectively). The twin-turbocharged 125d tops the diesel range and comes with a compelling mix of efficiency and performance.

A six-speed manual gearbox is standard on most cars, with a shorter shift in the M140i, while BMW's exceptional eight-speed automatic transmission is available across the range - and standard on some variants such as the 120d xDrive and 125d.

The powertrain of the old M135i was particularly impressive so we're expecting more of the same from the M140i. It delivers plenty of torque as well a smooth power delivery which, when contrasted to the likes of the four-pot in an Audi S3, feels much more exciting.