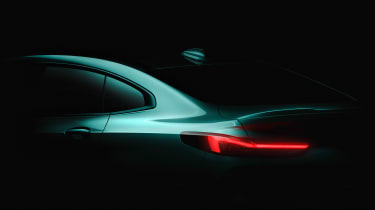 BMW has revealed a first look at its upcoming 2-series Gran Coupe, a front-wheel drive four-door coupe-cum-hatchback that will rival everything from the Mercedes CLA to the Hyundai i30 Fastback N.

In a similar vein to that of the 4-series Gran Coupe and incoming 8-series Gran Coupe, the 2-series has been designed to combine a sleek coupe silhouette with the practicality of four doors. We still have a while to wait before we see the finish article in the metal as it’s reveal is slated for November, at the 2019 LA motor show.

> Click here for the latest on the next BMW 1-series

This first official glimpse of the 2-series Gran Coupe shows off a familiar rear light graphic shared with many recent BMW models, and an unrecognisable take on BMW’s iconic hofmeister kink.

Unfortunately, the 2-series GC will not be based on a rear-drive platform as the current 2-series Coupe and Cabriolet are. Instead, it’ll borrow its underpinnings from the upcoming 1-series hatchback, which is expected to drop its current playful edge as a result of the switch to the new front-wheel drive platform that will underpin a swathe of incoming BMW and Mini products.

One look at the vast front overhang, high waistline and short wheelbase on the previously spotted 2-series GC prototypes would suggest that this car won’t be in the traditional rear-drive ‘Ultimate Driving Machine’ mould.

> Click here for more on the new Mercedes CLA

Thanks to its new platform, we also know which engines are likely to power the new 2-series Gran Coupe - expect a range made up from a combination of three- and four-cylinder, turbocharged petrol and diesel engines. High-output models will likely feature xDrive all-wheel drive, which is a Haldex-style system borrowed from the X1 and X2 SUVs. 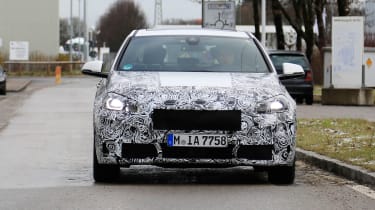 An M Performance model will probably assume flagship status initially, utilising the 2-litre turbocharged B48 four-cylinder petrol engine borrowed from the X2 M35i. Outputs are only speculative, but with AMG’s CLA35 very likely to share the A35’s 302bhp, we’d expect the top-spec Gran Coupe to follow suit with power in that ballpark.

Where does this leave a future 2-series Coupe and more importantly the M2? BMW’s M Division has remained coy about any future compact models, but as the new G20 3-series is only a mere 7cm shorter than an E39 BMW 5-series, there is surely space below it for a compact rear-wheel-drive model.

For now, the next BMW 1-series will arrive first, which will give us a good idea of what to expect from the 2-series Gran Coupe in terms of styling, interior design and powertrains.