The new BMW 4-series coupe is gearing up for its reveal, and the new M4 won’t be far behind 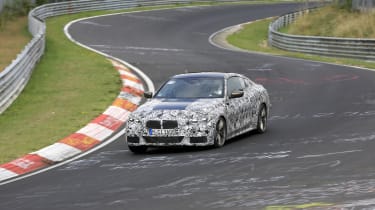 The new G20 3-series has started to proliferate on British roads which means its sleeker two-door variant isn’t far behind. Destined to keep the same 4-series nameplate as the previous model, this is our first look at the new 4-series Coupe in motion before the model’s debut later this year.

What these development prototypes can tell us is that the new 4-series will likely ape the larger 8-series Coupe, with a softer and less chiseled body overlaid on the 3-series’ CLAR platform. The headlights now sit higher than before, with a slimmer and softer shape than the 3 on which it is based, and lighting graphics more reminiscent of those on the 8-series.

> Click here for more on the new BMW M3

As with the 3-series, the new 4-series will feature a combination of four- and six-cylinder petrol and diesel units, with the standard range topped by the M440i, which is the model likely testing in these images judging by the matte grey finish to the prototype’s mirrors, wheels and bespoke trapezoidal exhaust outlets. 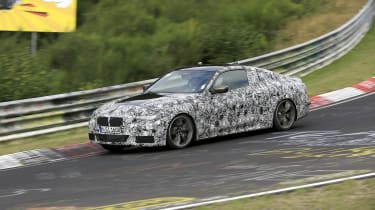 With the next M3 Saloon ready for a 2020 release, we’d suspect an M4 won’t be far behind. Powering the new M4 Coupe will be the new S58 3-litre twin-turbocharged straight-six petrol engine sending power to all four wheels via an eight-speed automatic transmission. Rumours persist of a purist rear-wheel-drive model paired to a manual transmission, but like many other performance cars that promise the option of a gearstick and three pedals, we’ll likely have to wait till beyond the M4’s initial release to see if that materialises.

The rest of the package will be as per the standard 3-series Saloon, featuring the same interior architecture, detailing and infotainment system. With the continued growth of its rivals, it’s not surprising to see the new 4-series’ continued physical growth, but its requisite handling balance remains an essential element to keep it relevant in our book.

Standard BMW 4-series Coupe models will likely debut before the end of this year, with sales commencing later in 2020, when they will be joined by Cabriolet and four-door Gran Coupe variants, the former with a new fabric roof rather than the rather déclassé folding metal arrangement of the current 4-series Cabriolet.

'The sorry slide from quiet confidence to muddled mediocrity'

Can Dickie Meaden beat Steve Sutcliffe in a straight(ish) race? We sent them to the Circuit Nuvolari with a pair of Hyundai i30 Ns to find out.
Visit/ford/mustang/202137/ford-mustang-shelby-gt350-tuned-to-over-1000bhp-with-twin-turbochargers