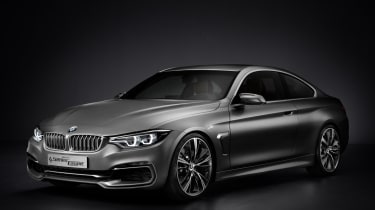 Details of the new 4-Series Coupe concept have been released after images of the car leaked out onto the internet. The new model could be the slightly more upmarket replacement for the current 3-Series Coupe, and is expected to make its first public unveiling at the Detroit motor show next month.

Choosing the 4-Series name would move the car into its own class according to BMW, and the designers have been able to give the 4-Series its own personality, using lower and wider proportions, luxurious interior trim and sharp new detailing.

The dimensions all point to a more luxurious and slightly larger 3-Series Coupe replacement. The wheelbase is 50mm longer, while the overall track has been increased by 45mm at the front and 80mm at the rear.

Although this is officially just a concept, it’s thought that the car is almost production-ready, with convertible and four-door Gran Coupe models also expected.