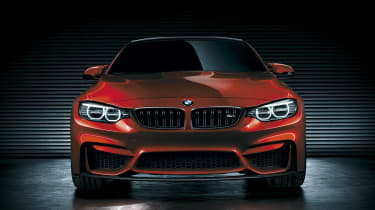 We’ve had a full technical briefing on the new BMW M3 and M4, with the headlines being a switch to turbocharged power, lightweight construction and what we’re promised will be a significant increase in performance.

The M3 saloon and M4 coupe will go on sale together next summer, with an M4 cabriolet following later, with the three cars set to share all their major mechanical components. As predicted, BMW has opted to replace the soulful (but thirsty) naturally aspirated V8 of the previous ‘E92’ generation M3 with a twin-turbocharged six-cylinder engine. Despite its similar dimensions to the existing 3-litre ‘35i’ motor, the M3’s engine is completely different, with a unique lightweight block with low-friction cylinder coating and two small, high-speed turbochargers that direct air into a large, low-resistance intercooler on top of the engine. Peak power has only increased slightly – BMW’s claim of 423bhp is 9bhp more than before. But torque has been boosted dramatically to ‘more than’ 369lb ft (500Nm) – the old car managed 295lb ft.

Unsurprisingly, turbocharging is set to change the character of the M3 considerably. Peak torque is available from 1800rpm through to 5700rpm, and maximum power is produced between 5500rpm and about 7200rpm (the limiter being set at around 7500rpm, less than the old V8 but impressively high for a turbocharged car.) More good news is BMW’s continued commitment to a manual gearbox option, with a conventional six-speeder being offered alongside a developed version of the seven-speed DCT twin-clutch from the previous car.

M division’s engineers have also put huge emphasis on decreasing the car’s weight, which has been reduced by around 80kg over that of the E90/ E92. The project team was set a target of a sub-1500kg kerbweight, and hitting it has seen the extensive use of lightweight materials, including a standard carbonfibre roof on both saloon and coupe versions, an aluminium bonnet and a bootlid that uses SMC plastic over a carbon frame. The new engine is only fractionally lighter than the V8 – BMW claims a 10kg saving, but other changes include a carbonfibre propshaft that removes another 5kg. For the first time, carbon-ceramic brakes will be an option.

Other technology includes switchable modes for damping, engine map, gearshift and also steering – with the new electric power assistance system coming in three different strengths. We’re promised by Albert Biermann, M’s head of engineering, that the new system is ‘considerably better’ than that fitted to the ‘991’ Porsche 911. Here’s hoping. The M3 and M4 also get a new electronically controlled limited slip differential, which can be fully unlocked to improve agility when it’s not needed to maximise traction.

Performance numbers? BMW is being cagey on giving definitive numbers, but we’re promised that the new cars will improve on the E90/ E92 to a similar margin than they did compared to the E46. That suggests a 4.5-ish second 0-60 time and a Nordschlieffe lap around the 7min 50 mark, though the usual electronically limited 155mph top speed is likely. This could be unlocked to around 190mph with the right options, though.

There are no price details yet, but a BMW spokesman told us that the M4 will cost ‘a couple of grand more’ than the outgoing E92, and definitely not feature the kind of price supplement that marked the transition from the E46 to the E92. So reckon on around £57,000 for the M4 and a bit less for the M - right on the money with the Audi RS4 and Mercedes C63 AMG. Tempted?