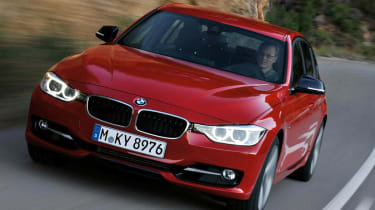 The new, sixth-generation BMW 3-series has been revealed. October 14 saw BMW pull the wraps off its new saloon via a live Facebook reveal, but now there’s a full selection of official pictures and details of the all-new F30. The 3-series is without doubt BMW’s most important car, grabbing the biggest proportion of sales as well as perhaps being the brand’s most recognisable model. As ever, it’s designed to be a jack of all trades, BMW boasting that it's lighter, cleaner and safer despite being bigger, more powerful and more agile. Lower emissions are yielded by, among other tech, new electromechanical steering and an 8-speed automatic gearbox. New Drive Performance Control technology allows the driver to alter car settings between Eco and Sport+ modes. UK sales begin in February 2012, and you can read more details on engines, prices and specifications of the new BMW 3-series here. Click on the pictures below to enlarge them and let us know what you think of the new Three here.