The new BMW 4-series Coupe is gearing up for its reveal, and the new M4 won’t be far behind 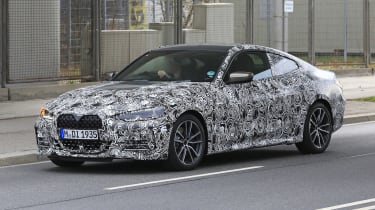 The new BMW G22 4-series Coupe edges ever closer to its launch, and as these spy images show, it’s going to be a little bit of a shock for the BMW aficionado. It shouldn’t really come as a huge surprise given the Concept 4 show car that was revealed at the 2019 Frankfurt motor show, but the 4-series will sport the company’s new take on its iconic kidney grille – one that’s significantly taller than before.

In these images the 4-series looks to be sporting the final incarnation of its bodywork, and while it resembles the concept car in its overall outline and dimensions, some of the flamboyance of the show car has been significantly dialled down. The kidney grille, while still large, sits less prominently than before and is less gaudy with a plastic stretched hexagonal design, where older BMWs would have done with slats.

The heavily sculpted bonnet design of the concept has also been toned down and the inset section where the BMW roundel sat just above the grille has been flattened off, presumably to make production tooling easier. It’s a theme that continues down the 4-series’ flanks with the aggressively contoured doors having been replaced by a less complicated design.

At the rear it’s also been significantly simplified with the indentation in the rear of the bootlid that ran between the rear light clusters being of a more traditional design. The bumper’s blander too, doing without the extensive chiselled air outlets or the diffuser. Where the show car sat on gaudy 21-inch alloys, the smaller 18-inch items sported by this latest test car do make it look somewhat under-wheeled.

The heavily stylised headlights of the show car have been replaced by more familiar BMW-style production items, sporting the company’s modern take on its quad headlight set-up. At the rear, the L-shaped BMW lights reminiscent of those fitted to the concept remain and give the rump a family resemblance to that of the 8-series Coupe. Indeed, its overall shape and outline is reminiscent of the top-of-the-range coupe but with simpler detailing, bar the new take on the kidney grille. 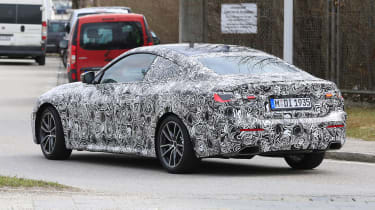 As it’s based on the 3-series, the new 4-series will feature the company’s CLAR architecture that underpins the majority of the range. Expect a combination of four- and six-cylinder petrol and diesel units, with the standard range topped by the M440i. There will no doubt be a hybrid version, a 430e, which should prove popular with company car buyers.

With the next M3 Saloon ready for a 2020 release, we’d suspect an M4 won’t be far behind. Powering the new M4 Coupe will be the new S58 3-litre twin-turbocharged straight-six petrol engine sending power to all four wheels via an eight-speed automatic transmission. Rumours persist of a purist rear-wheel-drive model paired to a manual transmission, but like many other performance cars that promise the option of a gearstick and three pedals, we’ll likely have to wait till beyond the M4’s initial release to see if that materialises.

The rest of the package will be as per the standard 3-series Saloon, featuring the same interior architecture, detailing and infotainment system. With the continued growth of its rivals, it’s not surprising to see the new 4-series’ continued physical growth, but its requisite handling balance remains an essential element to keep it relevant in our book.

Standard BMW 4-series Coupe models will likely debut before the end of this year, with sales commencing in late 2020 or early 2021, when they will be joined by Cabriolet and four-door Gran Coupe variants, the former with a new fabric roof rather than the rather déclassé folding metal arrangement of the current 4-series Cabriolet.