German tuner G-Power winds the BMW M5 V10 super saloon up to 888bhp and 231mph: the fastest ever saloon 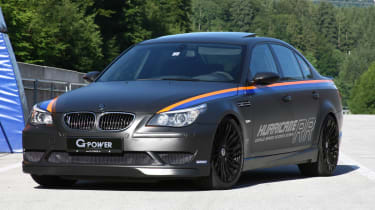 German tuner G-Power has set a new world record for the world’s fastest saloon car. Its monstrous creation is the Hurricane RR, a modified BMW M5, which has supposedly set the record at a mighty 231mph. This speed would challenge most thoroughbred supercars and yet the RR still comes with five leather-clad seats and a large boot. G-Power already held the record for the world’s fastest saloon with a similarly tuned M5 Hurricane RS which reached a mind-blowing 227mph. However, feeling this was not enough, G-Power used larger twin ASA T1-316 superchargers, coupled to their further tuned version of the M5’s V10 unit. These modifications upped the power of the Hurricane to 789bhp, although G-Power claims that the 'theoretical' output could be as much as 888bhp, meaning it could beat its own record several more times.  Added to the extra power, G-Power has added bigger brakes, stiffer suspension and a revised body. These modifications help to give the two-ton rocket ship the stopping power and grip it needs, considering it has around 300bhp more than a standard BMW M5.   The extreme performance does not end with the car’s top-end speed either. The Hurricane will reach 60 mph from standstill in just 4.3sec, almost half a second quicker than a standard M5. The car will continue its surge forwards, hitting 185mph in less than 25sec, until it reaches its record-breaking top speed. The only change G-Power made to the RR for the record-beating run was to swap the 20in custom wheels for smaller, 19in alloys with special Michelin Pilot Sport tyres. A fully converted model from G-Power will cost €252,100 (£207,500). This might seem steep for a BMW M5, but compared to the famed mid-engined, two seaters that can reach these speeds, it’s a relative bargain. But if you’re feeling the squeeze of difficult financial times, G-Power will offer its 227mph, 740bhp modification on any V10 powered M5 or M6, starting at a mere €56,000 - about £46,000.