An effective and clever executive car, but no sports saloon 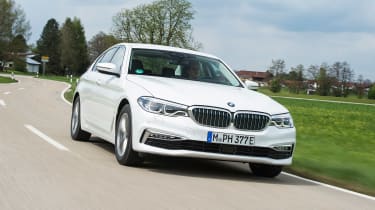 The 530e iPerformance is the first plug-in hybrid 5-series. BMW intends for it to bridge the gap between the regular 5 Series and its forward-looking i brand. The company is targeting 100,000 electric and hybrid car sales in 2017, and the 530e is part of that effort.

BMW quotes an impressive fuel economy figure of 149mpg, but naturally that will only be achieved over shorter journeys and when the batteries can be charged fully via the mains. The CO2 rating is 44g/km. 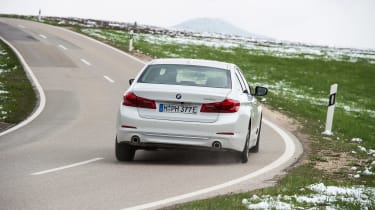 The petrol engine is a 2-litre, four-cylinder turbo that develops 182bhp and 236lb ft. The electric motor develops 111bhp and 184lb ft, although the total system output is rated at 249bhp and 310lb ft because those peak figures arrive at different points.

Driving the rear wheels through an eight-speed automatic gearbox, the two power units hustle the near-1800kg 530e to 62mph in 6.2 seconds and on to a top speed of 146mph.

With the electric motor positioned ‘upstream’ from the gearbox, the eight ratios can be used in electric mode, too. This does away with the need for a torque converter, helping to save weight.

From 2018 onwards BMW will offer wireless charging. The system consists of a base pad, which can be installed in a garage or out in the open, plus another pad attached to the underside of the car. When the car is parked over the base pad, the batteries are fully charged in 3.5 hours without the need for cables. 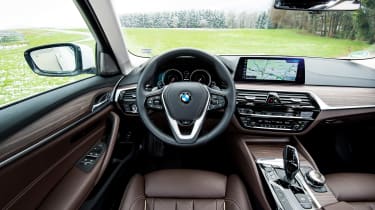 As well as the typical BMW drive modes – Eco Pro, Comfort, Sport – the 530e gets a suit of additional electric drive modes. The default is Auto eDrive, which uses the motor and petrol engine together to achieve the best balance between efficiency and performance. Max eDrive is the electric-only mode, which gives a top speed of 87mph. However, the engine will cut in if the driver presses through the throttle’s kickdown switch in order to meet the performance demand.

Battery Control mode, finally, allows the driver to set a target battery charge level between 30 and 100 per cent. The car will recover energy under braking until that level is reached, then conserve it for use later on, perhaps upon arrival a city.

Despite the iPerformance branding, the 530e is no sports saloon. It does have decent body control and reasonable straight-line performance, but there just isn’t the overall precision, agility, poise or adjustability to make it truly fun to drive.

It is, however, very refined and relaxing with a fluid but controlled ride quality and very high levels of overall refinement. The cabin, meanwhile, is excellent with a modern design, excellent fit and finish and an intuitive infotainment system. 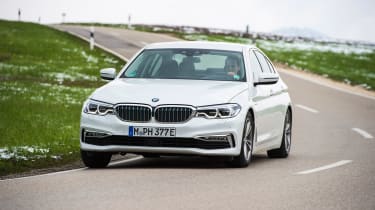 In normal use the drivetrain is fairly quiet, but under hard acceleration the engine does begin to sound very coarse and strained. The electric motor does provide very immediate and insistent performance away from the line, which is useful in busy urban driving, but from there on the straight-line shove fades away markedly.

The steering, while possessing a precision that allows you to place the car accurately on the road, is remote and devoid of feel, which means you have little idea of how much grip there is beneath you. The brake pedal, however, feels consistent and seamless as the car shuffles between energy recover and conventional braking, where certain hybrid cars can feel downright strange.

The 530e is a fine executive car and the hybrid capability will give it a certain appeal to many buyers – notably those who pay tax based on CO2 emissions – but it’s certainly no sports saloon in the conventional sense.