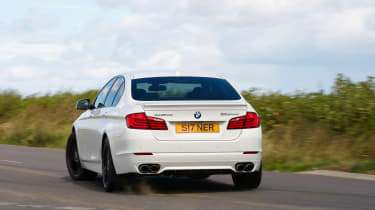 Alpina may just be treading on the M Division’s toes with this one. Traditionally it has been the engines that have set the two closely linked companies apart, with the turbocharged Alpinas offering an alternative to the naturally aspirated M Power products. Alpina, remember, is so intertwined with BMW that its cars are actually built on the same production line and are only transported to the Buchloe factory for finishing. So engineering philosophy is their main separator. And yet when the new M5 finally arrives next year, word is its engine bay will be fitted with a 4.4-litre V8 with a pair of turbos bolted to it – and that’s exactly what powers the new B5 Biturbo, a car that is already on sale.

There will, of course, be differences, but boundary lines are certainly becoming blurred. The M5 is expected to pack around 580bhp, a chunk more than the 500bhp of this car, but extend your right foot in the B5 and you soon start to suspect that Alpina’s claim might be a touch on the conservative side. Acceleration is instantaneous and ferocious, and the effect is amplified by eight gear ratios that ensure the revs are always riding the middle of the huge, 516lb ft swell of torque.

As usual, gearshifts are actuated by Alpina’s stubby little buttons on the back of the steering wheel, and the shifts themselves are a perfect combination of swiftness and smoothness, the ZF automatic swapping cogs in around 180 milliseconds. It’s a neat alternative to the twin-clutch set-up that the next M5 will possess.

There are no modes to play with on the gearbox, instead the car chooses them for you depending on which of the four levels of suspension firmness you select. The B5 has been lowered compared with a regular 5-series, the dampers have been reprogrammed and it rolls on non-runflat tyres, while the steering has been recalibrated to add more weight and feel when pushing on.

So, time to take the Alpina B5 to a favourite road, wind the suspension down to its raciest ‘Sport+’ setting and get ourselves a preview of the next M5.

You expect the B5 to hunker down, key itself into the tarmac and return superb body control and feel. It doesn’t. The messages are too filtered, it’s a little too soft and if you push really hard it can become disconcerting rather than rewarding. There’s too much of the standard 5-series about it. The fat torque figure means that it’s always ready to light up the rear tyres, but the B5 feels like a tweaked BMW rather than a re-engineered bespoke sports machine. The steering doesn’t help matters. A slight vagueness makes the B5 difficult to place accurately – something that’s crucial in a car of this size – so rather than encouraging you to go faster it has the opposite effect.

This, then, is where the M5 will have to come alive, for the B5 is more a grand-touring high-performance 5-series than a tied-down, hardcore M rival. Maybe this is by design, to neatly side-step the potential toe-to-toe clash up ahead. Let’s hope so, for the M5 will have to be better than this.