The new F10 5-Series has failed to capture our hearts so far. Will the 535d M Sport change that? 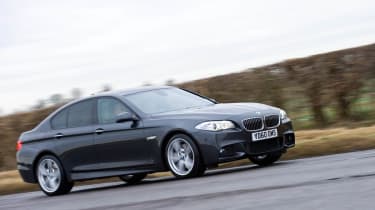 The latest version of the car that did more than any other to make the idea of a performance diesel acceptable: the BMW 535d. It still uses a twin turbo version of the 3.0-litre straight six, but power is up. Unfortunately so are both the weight (1790kg) and the cost (£45,320). This is also the first chance we’ve had to drive a 5-Series with the new M Sport pack.

In this car it has to be the engine – very few other companies have bothered with the idea of a sporting diesel. On the surface the 3.0-litre twin turbo diesel doesn’t seem to have moved on that much since it was first introduced with 268bhp and 410lb ft at 2000rpm back in 2004. Now it has and extra 27bhp and 32lb ft (delivered 250rpm sooner). Hardly a huge leap, but power doesn’t tell the full story here. Compared with the Jag XF the BMW’s engine was lacking refinement. The latest update has addressed that.

We haven’t been the biggest fans of the new 5. Too big, too heavy, too much like a 7-Series. This is the best we’ve tried, though. It’s still not particularly feelsome through corners, but the M Sport mods (developed By M division) do make the saloon more agile when changing directions. It’s a crisper car – still not as biddable and engaging as an XF, but close.

The engine is better than the Jag’s though. Massively strong from low revs it delivers deceptive pace and gearshifts that are pretty much undetectable even though there are eight ratios for the electronics to shuffle through. Noise levels have dropped, smoothness has improved and the drive through and out of corners means there’s more to enjoy about this car than the claimed economy figure of 46.3mpg (we easily got 38mpg).

Audi and Merc still have nothing to compare to the 535d, so it’s only natural rival is the Jaguar XF Diesel S. I have to say that’s a very close run thing and unless I needed the BMW’s extra space, I’d probably nudge towards the Jag for its more rounded, driver-orientated persona.

The 535d is also available as an SE model for £43,915, the M Sport upgrade costing £3300 (it’s the same price across the range). However, if you opt for £2265 Adaptive Drive to further sharpen up the handling, you’ll lose the M Sport Suspension…