The first BMW hybrid model to make it to the UK 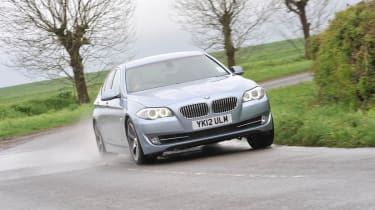 The first of BMW’s hybrid models to reach the UK, the 5-Series Activehybrid is the precursor to 3-series and 7-series sisters, both due later this year. It uses the company’s familiar 3-litre twin-turbocharged petrol engine, working in conjunction with a 40kW electric motor. All the green tech comes with a sizeable price for British buyers: £46,865 to be precise.

The 5-Series uses an electric motor sandwiched between the engine and the gearbox to deliver its extra assistance, and also to act as a generator to recharge the onboard battery pack. It’s a relatively simple solution which means the Activehybrid drives pretty much exactly as the petrol-only 535i that shares the internal combustion engine, with the same eight-speed transmission rather than a droney CVT.

The weight of the battery pack and the motor adds another 150kg to the mass of the not-exactly-svelte 535i, and although the electrical assistance effectively cancels out the increase in weight, it doesn’t add any extra performance – BMW claims identical performance figures for both models.

Like most modern hybrids the 5-series can operate in pure electric mode for brief periods and at low speeds.

Pretty much exactly like any other top-end 5-Series. The electric side of the powertrain adds its assistance seamlessly, and as the official numbers suggest it doesn’t feel any quicker than the existing 535i. At least the Activehybrid is refreshingly free of the sort of nannying information displays that green cars tend to sport. From the driver’s seat, it feels just like a 5-series.

The extra mass – and fairly pliant suspension settings – mean that feels a bit softer than the rest of the range, and although it’s comfortable and impressively wafty at cruising speeds, it’s lacking a bit of composure when asked to deal with rougher road surfaces.

The electric-only mode feels very gimmicky – anything more than the most gentle pressure on the throttle pedal will see the engine firing into life again.

It’s hard not to conclude that the Activehybrid is designed for the parts of the world where diesel is still a dirty word. In the UK, we’re struggling to see the point.

We managed a 34mpg in everyday use, an improvement of around 4mpg over what we’d expect to see from the 535i – but considerably short of the economy of a 535d.

The BMW 5-Series Activehybrid is available now from £46,865.