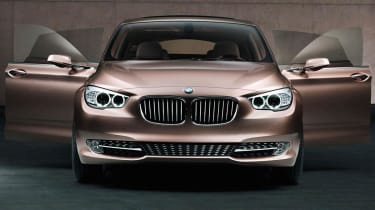 Get ready to welcome another niche car into the market. The big Germans are no strangers to combining genres and trying to out-innovate each other. Think the coupe/saloon Mercedes CLS, hot hatch/estate Audi S3 Sportback and SUV/coupe BMW X6.

This all-new BMW 5-series Gran Turismo has elements of the latter along with 7-series styling influences. While its name and five-door bodystyle would suggest it's a BMW 5-series hatchback, it is actually larger than the current 5-series Touring, while inside it is intended to be more luxurious and flexible.

As the name suggests, the Gran Turismo aims to be coupe-like in its style with comfort placed high on the agenda inside. Rear passengers are catered for especially, with the two back seats raised six inches compared to a regular 5-series while the seats tilt and slide individually. There’s more space than in a 7-series while outgoing BMW design boss Chris Bangle revealed the 5-series GT was designed to have accommodation similar in feel to first class air travel.

It also previews the look of the 2010 BMW 5-series, with the front end in particular a clear sign of what’s to come. It takes inspiration from the CS Concept from a couple of years back, with distinct shades of the BMW X6 and new 7-series in the rear ¾ view and the taillights.

The back of the car also sees the introduction of a bootlid that combines both saloon and hatchback, and it can be opened as either. It’s an idea that also features on the Skoda Superb in the shape of ‘twin-door’. With the rear seats folded down it is set to offer similar loadspace to the X5 SUV.

While it’s just a concept for now, changes for the production model won’t be major. Those side mirrors will become more practical and less brittle while the wheels will shrink. The car is likely to get both four and five seat configurations. The GT is expected to account for 12-15 per cent of 5-series sales – about 2500 cars a year in the UK – with the existing saloon and Touring variants sitting below it in the range.

It’s expected to share engines with the upper reaches of the rest of the range, so think the 3-litre petrol and diesel engines from the 530i and 530d, as well as the bigger V8 engines from the 540i and 550i.  Hybrid technology is touted for the 5-series GT, too. Although don’t expect an M5 version anytime soon…

It can be seen for the first time at the Geneva motor show, starting on March 3. Use evo.co.uk’s Geneva motor show guide to get the latest news and previews before the show, and live reports once the show kicks off.