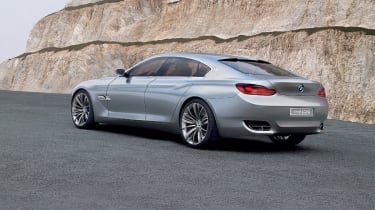 BMW has put down a marker for Aston Martin and Porsche by taking the wraps off a huge four-door coupe GT concept car at April’s Shanghai motor show. The ‘Concept CS’ also reveals an all-new sculptured look for BMW, the company’s first big design revision since the controversial Chris Bangle-designed 7-series broke cover at the 2001 Frankfurt show.

If it reaches production, the big Beemer will not only have to take on the forthcoming Aston Rapide and Porsche Panamera, but will also have to compete with the Mercedes CLS and Maserati’s Quattroporte. BMW chairman Norbert Reithofer would not go as far as to confirm that the CS would progress beyond the concept stage, however, but he did rattle his sabre at his arch rivals. ‘There is much expansion potential at BMW,’ he said, ‘and while we will not necessarily launch all the products that people have speculated on, our competitors should not feel too safe, we still have lots in the pipeline.’

At 5.1 metres long and with a roof height of just 1.36 metres, the Concept CS is low and mean and doesn’t look like it was designed to carry much luggage. ‘We wanted to do a real sports car with four seats,’ says Adrian van Hooydonk, BMW’s design chief, ‘but I am six foot four inches and I can fit into the rear seats.’

If it enters production, the CS would most likely share its underpinnings with the 7-series. Under the bonnet of the concept, meanwhile, is BMW’s 500bhp, 5-litre V10 M5/M6 engine, but van Hooydonk says we shouldn’t read too much into that – apparently it’s the shape of the car’s front end that is more important, as it sees the return to BMW’s classic shark-nose look, with the front of the bonnet undercut by the grille. Van Hooydonk reckons that while this was a difficult look to achieve at the same time as meeting European crash-test regulations, BMW’s engineering staff have worked hard to allow his design team to hark back to the company’s styling roots.

What hasn’t continued for this new look is Chris Bangle’s gargantuan boot-line, but those who prefer a svelte derriere shouldn’t get their hopes up too much, as van Hooydonk explains: ‘There are still large parts of the world that appreciate a car like that [the Bangle 7-series]. You should know that beauty is in the eye of the beholder.’

It certainly is. On the one hand, the sculpted panels of the Concept CS are a technological tour de force, and the result as a whole is almost certainly attractive, with the obvious Coke-bottle shape of the car harking back to Albrecht Graf von Goertz’s 507. On the other hand the shape also has hints of (yikes!) the mk3 Ford Cortina, while the rear wheelarches look like they’ve been cold-chiselled off a Bentley Flying Spur and the front end off BMW’s own Z8 sports car.

Van Hooydonk takes this all on the chin – as might be expected of a BMW designer – emphasising that it is proportions that matter with this car, not the details. ‘This car is to show what we can do, not what we will do,’ he says. ‘It’s not just for the happy few – ordinary BMW owners will know there is a new sense of sculpture, lightness and dynamics at BMW.’

That might be so, but why launch this car in Shanghai? Reithofer is keen to emphasise separate trends, and two of these are the rapid rise of the Far Eastern oligarch and the European environmental campaigner. While in Europe environmental concern is swinging from singling out 4x4s to those who drive large cars in general, in the Far East the demand for super- luxury cars is bigger than ever.

’Asia is our main focus at the moment,’ says Reithofer. ‘Our goal is to sell over 150,000 cars in the region by 2008.’ One has to wonder whether the Concept CS is more about that aim than it is to do with a small battle on the small playing field of Europe.