BMW has unveiled a concept of the highly anticipated 5-Series GT, also known as PAS – and we have the pictures that show the real machine undergoing final tests in Munich 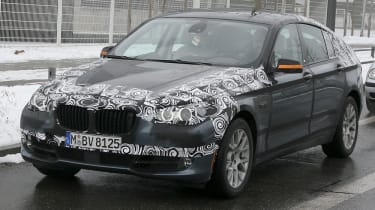 The model is set to have its official unveiling at the Geneva Motor Show next month and follows in the vein of previous concept vehicles from the Bavarian carmaker with a production ready look.

Styling is drawn very strongly from the new 2010 BMW 7-series with its large front grille, headlights and L-shaped tail lights. The coupe-like profile clearly follows in the footsteps of the X6.

Our spy-shots reveal it’s a true fastback, allowing more headroom than in the X6 while being significantly smaller than Mercedes’ R-class.