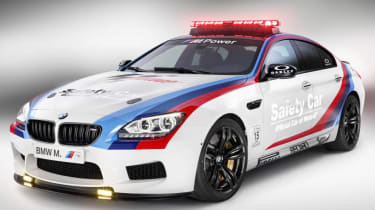 BMW’s supply of MotoGP safety cars continues for the 2013 season, with a new M6 Gran Coupe picking up the baton from last year’s M5 saloon.

The German carmaker has a long association with the sport, providing support cars for the last 15 years. The M6 Gran Coupe is the M Division version of BMW’s Mercedes CLS-rivaling four-door coupe, and shares its drivetrain with the M5. That means its rear wheels are driven by a 4.4-litre twin-turbo V8 that serves up 552bhp and 501lb ft of torque; more than enough to keep it leading a pack of 1000cc MotoGP racing bikes.

It’s had modifications for its starring role, though. The front apron is new, the bonnet gets motorsport-style locks and the mirrors, grilles and 20in alloys get a lick of black paint. Like previous BMW M safety cars, there’s a louder, more crowd-pleasing Akrapovic exhaust system. There’s also a pair of race harness-equipped Recaro sports seats up front.

The M6 Gran Coupe will be joined by M5 and two-door M6 safety cars, wearing the same white, red and blue livery, while the MotoGP safety officer will get a matt black M3 coupe. There’ll also be a pair of tri-turbodiesel M550d Touring medical cars and two BMW HP4 safety bikes.

BMW’s MotoGP alliance stretches back to 1999, with the iconic Z8 roadster making its public debut in safety car colours. The M Division has taken the role since 2006, with the season’s best qualifier winning a car at the end of the year. 2012 world champion Jorge Lorenzo walked away with a BMW M3 Competition last year; having won an M3 in 2010, too, we’d imagine he gave it away…