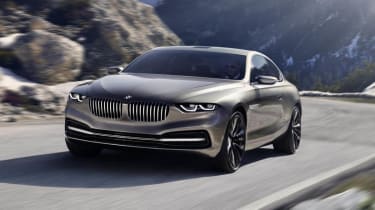 BMW has dropped its clearest hint yet that the 8-series coupe will make a comeback. The Gran Lusso Coupe, unveiled at the Villa d’Este concours event in Italy, has been created in conjunction with design house Pininfarina. It doesn’t officially preview any particular new model, instead trialling design cues that could appear across the BMW range in the future.

But its elongated, two-door appearance and utilisation of a V12 engine evokes memories of the increasingly iconic, pop-up headlight equipped 8-series of the 1990s. And with an increasing appetite for niche luxury models seeing Audi, BMW and Mercedes adopt a wealth of body styles in their large car line-ups, a 7-series based coupe could sit on the horizon.

Styling highlights include a rounded kidney grille, smaller, subtler headlights than we’ve been used to on modern BMWs and a neat, wraparound rear light cluster. The double-deck bootlid so notable on the mk1 6-series looks to have made a comeback, too, while the Gran Lusso’s doors are heavily sculptured.

The interior looks much like that of the current 6-series, though there’s an abundance of more exotic materials, including kauri wood, Foglizzo leather and a roof lining made of Italian virgin wool.