Drop-top all the better for enjoying the M Power V10 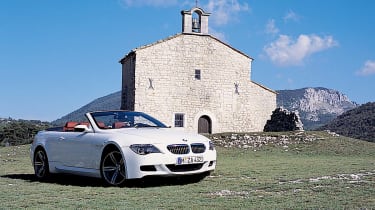 There are very few places I can think of where a white M6 Convertible wouldn’t look utterly out of place. A Chelmsford hen night is one. The Côte d’Azur another. BMW, in its unimpeachable wisdom and to my great relief, has chosen the latter.

It’s an area awash with tanned and moneyed sunglass wearers cruising inconsequentially about in convertibles, but even so the M6 is getting a lot of looks. Viewed even through the darkest Ray Bans it’s not an attractive car, but it somehow manages to be handsomely ugly. Roof up it has an air of what I imagine could be called ‘gangsta rap’ about it, the drop-down rear window no doubt being hugely convenient for drive-by shootings. Perhaps because of this, or perhaps just because they inwardly loathe themselves for looking at all, I noticed people tended to glance at us rather furtively as we cruised along the seafront towards Cannes.

Undoubtedly the best bit about lopping the roof off an M6 is that you can hear the glorious 5-litre V10 in all its mellifluous majesty, exhaust pipes woofling when you back off or howling when you keep it nailed to the far side of 8000rpm. It’s an engine that has deservedly won numerous awards – including International Engine of the Year two years running – and I’m quite sure no one complained about its acceptance speeches ‘going on a bit’.

Around town the key to getting full aural satisfaction with the roof down is to select a higher gear in the seven-speed SMG ’box than is strictly necessary. Then when a suitably high rock-face hoves into view, give the left-hand paddle a tug and enjoy the blip-perfect downshift. The only disappointment is that you can’t claim any credit for its execution.

A 20mph crawl past chic boutiques might be where most of these cars will spend most of their time, but an M6’s real home is on roads like those in the hills above. Switch the electronic dampers to their firmest setting, press the power button to summon up all 501bhp and prepare to attack possibly the greatest drivers’ road in the world: the Route Napoleon.

The M6 was comfortable, showy and refined in Nice, but now it’s taut and ruthlessly controlled. Through corners it leans on vast reserves of grip and it demolishes straights in awesome lunges punctuated only by brutal, thumping upshifts. There’s never once a sense that the M6 isn’t going to rise to any challenge set. No matter how quick the direction change, the car is always underneath you.

The poise through the corners is all the more remarkable given the sheer scale of the M6 Convertible. Thanks largely to the roof mechanism, and in spite of carbonfibre reinforced plastic for the bumpers, it weighs some 220kg more than the coupe. Almost two tons does start to tell on an engine that, if anything, is slightly lacking in torque, and the 0-62 dash has lengthened by a couple of tenths.

The only real criticism is that the steering – which decreases its assistance considerably as successively stiffer damper modes are selected – lacks a little feel at lower speeds. Suspension changes over the Coupe are largely limited to the electronic programming of the dampers, which in ‘normal’ have understandably been tuned more towards comfort than the fixed-top car. Impressively, it took some really poor surfaces before there was any sign of shudder, and even then it didn’t approach being a distraction.

At over £86K the M6 Convertible is BMW’s most expensive car. I’ve no idea who will buy one, let alone in white, but the M Division can be proud that there is a time and a place for it, be it the N85 above the Côte d’Azur or a roundabout on the way out of Chelmsford.