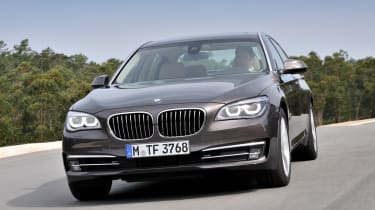 BMW has given its flagship model, the 7-Series, a mid-life facelift, which includes some minor cosmetic changes and some more substantial upgrades under the skin – with a new line-up of engines and re-developed rear suspension.

Perhaps the biggest news for 7-Series fans is the introduction of the 750d xDrive, which is fitted with BMW’s new triple-turbocharged diesel engine, which has already been seen in the X6 and 550d xDrive. It produces 376bhp and 546lb, which gives the luxury barge a 0-60mph time of 4.9seconds and the possibility of 44.1mpg economy.

To be introduced along with the facelift models, BMW has also announced the new ActiveHybrid7, which like the smaller 3- and 5-Series hybrids, uses a version of the 3.0-litre six-cylinder turbocharged engine in conjunction with a single electric motor, to produce a total combined output of 349bhp and 369lb ft.

It’s unlikely that all of these will be coming to the UK, with the 255bhp 730i and monster four-wheel drive 750d xDrive likely to remain in mainland Europe and other international markets for the time being – unless a significant demand arises.

Cosmetic changes are minor, with the introduction of LED headlights and a new seven-finned grille (opposed to the old twelve) being the biggest change. The interior remains largely the same too, with just a few minor detail changes, and re-designed seats.