The most powerful diesel saloon in the world. evo's John Barker experiences its triple-turbocharged diesel engine for the first time 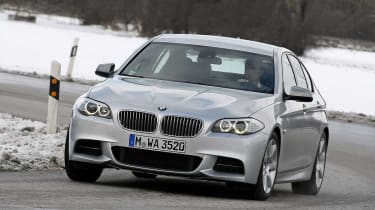 The BMW 550xD is one of the first products from BMW’s new line, ‘M Performance’, a sub-brand to the legendary M division. The cars are engineered by M GmbH and are marketed as sporty but everyday useable, much as the original M535i was back in the early ’80s. The M550d is the most sporting of all the cars currently on the stocks, though the concept of the M135i, a more affordable 1M 1-series with over 300bhp, looks very appealing. The first M Performance cars into the UK will be the X5 M50d and X6 M50d.

The undoubted highlight is the new triple-turbo straight-six diesel. This 3-litre engine produces a monstrous 376bhp and 546lb ft of torque, revs to 5400rpm and shoves the hefty 5-series from zero to 100kph in just 4.7sec. Yet it also produces an official CO2 figure of a mere 165g/km and manages a combined consumption of 44.8mpg. Astounding.

The triple turbo technology is there to cover every gap in the delivery, though the standard-fit eight-speed auto helps ensure this, too. The turbo set-up consists of a large low pressure turbo that feeds pressurized air to two smaller turbos. At very low revs the big turbo is bypassed, response being provided by small turbo number one, which has variable vanes. The big turbo soon starts contributing and when it’s producing too much boost for one small turbo, the second comes into play. Because the engine produces so much torque – the full 546lb ft from just 2000rpm - the M550d employs the xDrive four-wheel drive system, tuned for this application.

Smooth, long-legged and properly fast – it’s a real continent crosser. It feels wickedly strong accelerating full-bore up through the gears, with a deliciously relentless sense to the delivery and a bold, sporty straight-six roar. The chassis feels well matched to the drivetrain, offering good poise and a smooth ride, and in the corners it’s well balanced, turning in keenly for a heavy car and then settling nicely, effectively onto its tail as the torque floods in for a neat, fast exit. And that’s on Winter tyres. xDrive has been tuned to give the car a rear-drive feel and some latitude in rear slip to match the M Performance brand values, and when drive is sent to the front wheels it’s a maximum of 40 per cent.

After the M5, it’s the best driver’s 5-series in the current line-up (though we haven’t tried the Touring version!). Shame the steering has a bit too much weight and lacks some feedback and the engine has a curious off-beat note, like it’s a cylinder down, at low engine speeds.

Worst news? It’s not coming to the UK. Nor is the other car we tried, a 6-series coupe, the M640d xDrive, but that’s less of a loss. It has the less potent twin-turbo version of the engine and is not nearly as impressive. Instead, we’re getting the chubby off-roaders with the 376bhp triple-turbo engine, the X5 and X6 M50d. They go on sale in June at £60,325 and £62,260 respectively. Whoopee.