New high-performance X5 and X6 models coming to the UK 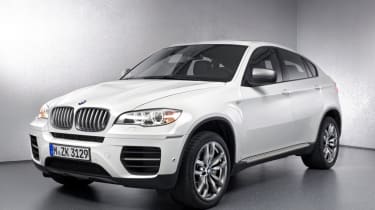 After news of BMW's plan to launch a new line of diesel-powered M Performance cars appeared at the Detroit motor show, the company has finally confirmed that the first models coming to the UK with the new high-performance package will be the X5 and X6 M50d, available from June.

These models will be the first to utilise the all-new triple-turbocharged straight-six diesel engine - BMW's most-powerful production diesel engine ever. The engine produces 381bhp and a phenomenal 530 lb/ft of torque. These impressive figures will propel the X6 from 0-60mph in 5.3 seconds, while averaging 36.7mpg. The X5 isn't far behind, managing 5.4 seconds to 60mph and a slightly better 37.7mpg, just creeping under 200g/km of CO2. Both cars are limited to 155mph.

By using three turbochargers, two small and one large, BMW engineers have ensured that the engine receives optimum boost-pressure at all points in the rev-range, with optimum torque available from 2000-3000 rpm. The standard eight-speed automatic transmission has been programmed to ensure an 'uninterrupted flow' of power with seamless changes, in either automatic or manual mode.

BMW are also fitting this engine into the 5-series, calling the resultant super-saloon the M550d, but for the time being, BMW have no plans to bring it to the UK.