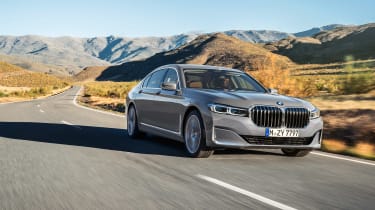 BMW has facelifted its flagship 7-series saloon. It’s full of cutting-edge interior tech, new petrol and hybrid powertrains and the latest semi-autonomous capability, but chances are it’s the revised styling that will initially grab your attention.

In an effort to make the 7-series saloon more assertive, as well as to further align it with its SUV cousin the X7, BMW has grafted on a new interpretation of the iconic kidney grille, but on a rather different scale to what we’ve seen before on a BMW saloon. Other design changes are more subtle, including slimmer headlights, now incorporating optional laser-powered high-beams, revised lower bumpers and new rear lighting, complete with the predictable light bar, but it’s that grille which seems to be attracting the most attention.

> Click here for our review of the Mercedes S-class

As mentioned above, the new 7-series’ changes are more than skin deep, with a wide range of new and heavily revised powertrains, ranging from the entry-level 730d right up to the flagship V12 M60iL. The two lower-powered diesel engine options, the 730d and 740d, are unchanged, without any sign of a new four-cylinder 725d model upon the model’s launch. At the other end of the diesel spectrum is the quad-turbo 3-litre straight-six borrowed out of the X5 M50d and pumping out 395bhp with 560lb ft of torque.

Petrol models will be made up from new petrol V8 option, specifically the 522bhp 4.4-litre twin-turbocharged V8 engine borrowed from the BMW M850i, and a range-topping M760Li model with the same 577bhp twin-turbocharged V12 engine as before. This most potent 7-series will reach 62mph in just 3.8sec, two tenths faster than the petrol V8.

Completing the engine range is a new 745e plug-in hybrid, replacing the previous 740e. Electric range has been boosted to 31-35 miles on the new WLTP cycle, achieved thanks to a larger 12kWh lithium ion battery pack. Combined outputs are 388bhp, with 442lb ft of torque, and that will help the big saloon get to 62mph in as little as 5.1sec.

> Click here for our review of the BMW M760Li

Most models are fitted as standard with all-wheel drive (it’s optional on lower powered 730d and 745e models) and available in optional extended wheelbase versions. All engines are also connected to the latest version of ZF’s eight-speed automatic. Active Integral steering, or rear-wheel steering, is also available on selected models, and an integration of an active roll stabilisation system borrowed from the BMW’s new X5 and X7 to keep the body level under hard cornering.

Two-chamber air-suspension is standard across the range, while a new camera-based anticipatory chassis control system has been integrated into the system, using data input to prepare the suspension for bumps on the road such as potholes or expansion joints.

The 7-series cabin has not changed markedly in design, save for some more sumptuous materials added in an effort to match the S-class’ more theatrical interior ambiance. With the same architecture that is seen in the older BMW models such as the 5- and 6-series’, it does already look a step behind top rivals though. The technology has not stood still though, with the 7-series now incorporating the latest version 7.0 of the BMW operating system as seen other new BMW models like the X5 and 8-series. Of course, being a German flagship saloon, this is only the tip of a technological iceberg that imbues the 7-series with enough technology acronyms to fill a phone book.

> Click here for more on the new BMW X7

In an effort to match the vault-like refinement of its rivals, BMW has paid attention to general noise and vibration suppression. This has been approached in multiple ways, combining new insulation throughout the bodywork and redesigned active engine and gearbox mounts are among the most telling.

As the luxury saloon market continues to become increasingly marginalised by private buyers more interested in large SUVs, the 7-series’ move to more dramatic styling comes as little surprise. Whether the bold new look makes it any more appealing to buyers will be the more pressing question and one that may be predomenantly answered in markets outside Europe. UK prices have yet to be released, although we don’t expect a dramatic change from current 7-series prices, with customer deliveries starting Q1 of 2019.