Fast and luxurious, but not enough of an M car 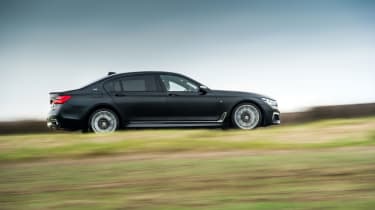 For a brief couple of months the M760 Li was BMW’s fastest accelerating road car ever, right up until the new F90 M5 came along and shaved a 0.3sec off its 3.7sec 0-62mph time. Still, being the second fastest accelerating BMW isn’t too bad a claim, especially when the M760 Li isn’t even a full-blown M-car (it’s only an M Performance model) and that it’s a 2.2-ton limo with massage seats, TVs, a panoramic roof and a remote control parking function.

> Read our review of the new BMW M5

The new M5, however, is 9bhp down on the M760. As a result, with 601bhp from its V12, the big limo retains its status as the most powerful BMW to go into mainstream production. 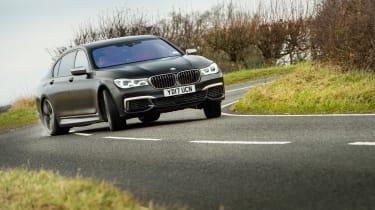 The 6.6-litre twin-turbocharged 12-cylinder engine is not only the first time this engine has appeared in this sixth generation of 7-series, but it’s also the first time any BMW V12 has been tweaked by M Performance.

There’s a new high-pressure injection system and the double (for both banks of cylinders) VANOS variable camshaft timing has also been recalibrated, resulting in a peak engine output of 601bhp produced at 5500rpm, and peak torque of 590lb ft arriving at 1550rpm, the curve remaining as flat as a pint of night club lager until 5500rpm.

Tweaks to the shift speeds of the eight-speed gearbox and the combination of BMW’s xDrive four-wheel drive system result in an M4 GTS-beating 3.7sec 0-62mph (BMW claims a 0-60mph time a tenth quicker) and a top speed of 189mph if you opt for the M Driver’s Package.

Most of the time the M760’s all-wheel drive system is rear drive-biased, but when required xDrive will reduce the torque flow to the rear axle and direct it forward. However, at no point will the split be greater than 50/50. BMW claims that three years ago a powertrain this powerful, and therefore this car, wouldn’t have beeen possible due to the rear axle being unable to cope with such high levels of torque. 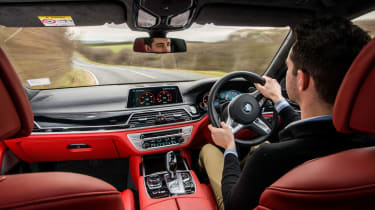 As you’d expect from the most expensive model in the BMW model line-up the M760 Li wants for nothing. Executive Drive Pro air suspension comes as standard along with active anti-roll bars that have been set-up to make the most of the car’s performance, and try to prevent container ship levels of roll when you aim the nose at an apex. Active steering is also standard, so too rear-wheel steering to help make the 3.2-metre long wheelbase feel as agile as possible.

Further technical highlights include 395mm diameter M Performance brakes (identified by their blue calipers), and 20-inch alloy wheels that are a unique design to the M760.

Additional highlights include a sports exhaust system, an M aero package that includes a larger air intake in the front bumper, grey finished kidney grille and mirror caps, and the subtlest of boot lid spoilers.

It won’t come as a surprise to hear the M760 Li xDrive drives remarkably similarly to any other current generation 7-series. The interior sits between the driver-focused cockpit of Porsche’s Panamera and the comfort-orientated interior of Mercedes’ S-class. Curiously though it lacks any identifiers to remind you that you’ve spent £132,230 on an M Performance BMW. A pair of sport orientated front seats wouldn’t go amiss and less chrome-effect plastic, too.

If you’re expecting a snarling V12 you’ll also be disappointed. It’s serene, almost silent and effortless in moving the 2255kg limo around, the eight ratios shuffling with little intrusion to make you look down and take notice which gear you’re in. It’s an experience not dissimilar to the one offered up by BMW’s smooth straight-six engines. 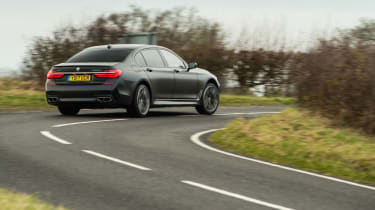 Switch from Comfort to Sport mode and, although the instrument cluster turns from a gentle blue hue to a more flamboyant orange and the driver’s seat side bolsters tense to pinch you in place, the expected engine performance never really comes. The throttle sharpens a degree or two, but it’s not split-second reactive and your right foot still has plenty to do when you want to get those two turbos puffing hard. Today’s generation of hot-V V8 turbos punch harder and deliver a more explosive shove when you open the taps.

Sport mode has a much more dramatic effect on the steering and chassis. The steering is remote in Comfort, without any natural weight, no apparent feel and only a vague ability to direct the car. Thankfully, it’s much more assertive when you engage Sport. The chassis’ Comfort setting is very serene and is perfect for long straight roads, but as soon as there’s even a hint of a corner Sport is essential. The ride is sacrificed slightly, as Sport struggles to isolate you from all road imperfections, but it’s still worth it for the extra precision it grants you.

Considering both its size and weight the M760 doesn’t embarrass itself in the bends, unless you get clumsy. In medium to quick corners the chassis shows good balance, but there’s still too much body roll – despite the best efforts of the active dampers and anti-roll bars – and it takes a small leap of faith to push right up to the M760 Li’s limits on the road. 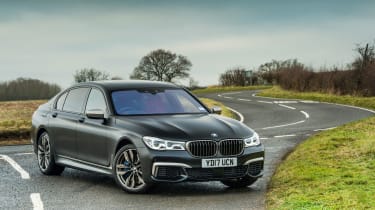 Even though the drivetrain favours the rear axle, in tighter turns the nose will still push on if you’re heavy with the throttle too early in a corner. If you keep your nerve, or are more measured with your throttle inputs, the torque will find its way rearward and the car will tighten its line – you can even leave the exit with a degree or two of lock applied some of the time. Find a big enough area of tarmac (it’ll need to be vast because the M760 Li is over 5.2 metres long) and you can bonfire a set of rear tyres with relative ease.

Despite its M Performance title, the M760 Li is still more of a luxury car than it is one of BMW’s driver-focused models. There is some satisfaction to be had from behind the wheel, but it’s your passengers who will be truly content.

£135,340 is what a M760 Li xDrive will cost you, placing it in the middle of the pack of some very serious rivals. In terms of standard equipment UK customers will enjoy everything from Apple CarPlay, a Bowers & Wilkins Diamond stereo, climate control, comfort glass, adaptive LED headlights, rear seat entertainment and a panoramic sunroof.

Porsche’s new £122,480 Panamera Turbo Executive is the Stuttgart firm’s long wheelbase super limo offering. It’s 50kg lighter than the BMW and its twin-turbo V8 produces 59bhp and 22lb ft less torque, but with a 3.7sec 0-62mph time (with launch control) and 190mph it’s just as fast, but crucially the more driver-focused and the more rewarding drive as a result.

With a 552bhp naturally aspirated V12 and a 203mph top speed, Aston Martin’s Rapide is a thrilling option. Interior space is at a premium but few super sport limos turn heads like the big-hearted Aston. At £147,950 it’s also a bit of a bargain compared to the S65.

The Rolls Royce Ghost is a distant relation to the BMW M760 as it uses an enlarged version of the same engine and the same platform, only heavily reworked. The Ghost is more luxurious than the BMW, however, and does an even better job as a limousine.

Another British contender comes from Crewe, in the guise of Bentley’s Flying Spur W12 S. Like the Aston, it’s not the youngest and its age is beginning to show, but offers the most luxurious surroundings in which to experience 626hp. Even if it does cost £169,800 to do so.

There is, however, another BMW that we can’t help but think does the (genuine) M car thing with a big dose of luxury already on sale: the £97,980 552bhp, M6 Gran Coupe.