The most high tech car in the world right now, but where are the BMW driving thrills? 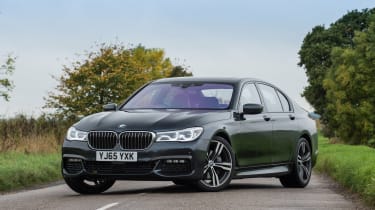 The BMW 7-series represents the absolute pinnacle of technology for the brand right now. The amount of in-car functionality is staggering, besting even the mighty Mercedes-Benz S-class for technology.

But unlike the Mercedes, BMW has an Ultimate Driving Machine reputation to uphold. As such, the 7-series has to do much more than offer clever parking cameras and complex massage seats; it has to be exciting to drive too.

BMW anticipates the majority of 7-series customers will opt for the 261bhp 730d with its 3-litre straight six ‘TwinPower Turbo’ diesel engine. Available in both rear-wheel and – for the first time in the UK – xDrive four-wheel drive form, the engine users a clever variable inlet geometry turbo to deliver better response at low revs. An 8-speed Steptronic automatic transmission is the only available gearbox.

At low revs, there is more cabin noise from the diesel engine than you might expect, but once up and running, refinement levels are supreme and easily on par with a diesel-engined Mercedes S-class.

>Read our best in car tech

In rear-wheel drive form, the 730d completes the 0-62mph run in 6.1sec, dropping to 5.8sec for the xDrive variant. These both increase by one tenth for long wheel base 730d models. Top speed is limited to 155mph.

With 457 lb ft of torque from 2000rpm the 730d feels quick off the mark, but there is a distinct lack of drama about the way the car accelerates. The smooth 8-speed gearbox, which makes shifts virtually unknown, ensures the engine never feels anything less than supremely tractable and responsive. The issue is that it’s just so refined that the 7-series loses some of that drivers’ car appeal you normally find throughout the BMW range. 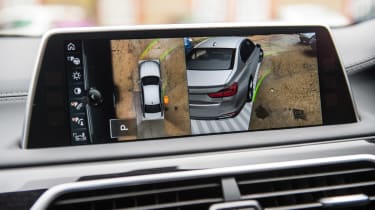 There's a 740e plug-in hybrid too, which uses a 2-litre four-cylinder petrol engine - yes, in a 7-series - and an electric motor to supply a combined 322bhp and 369lb ft of torque. At 5.4sec to 62mph it undoubtedly offers BMW-style performance.

Fuel consumption is impressive for a car of this size. BMW lists the standard short wheelbase 730d as delivering 60.1mpg on the combined cycle. The 316bhp, 502lb ft 740d manages 57mpg. This then decreases somewhat predictably to 34mpg in the petrol 750i.

The 740e, unsurprisingly, offers the best economy at a combined 134.5mpg (with 49g/km of CO2). As ever, your economy may vary wildly depending on the proportion of electric-only range you're able to use. For long motorway trips, the diesels will be the best option.

Perhaps the most exciting thing about the 7-series isn't its interior tech at all; instead it’s the hybrid carbonfibre reinforced plastic (CFRP), aluminium and reinforced steel chassis. The new 7-series uses CFRP in its roof, A-, B- and C pillars, delivering improved torsional rigidity and a 125kg weight saving over the previous car.

Crucially, this ‘Carbon Core’ tech is set to make its way into the new 5-series, which will also take advantage of the 7-series chassis.

BMW clearly learned a lot from mass-producing its environmentally friendly CFRP tech with the i3 city car and i8 sports car so it’s good to see this now making its way into more mainstream cars.

It should translate to improved driving dynamics and indeed, the 7-series is definitely the most exciting car to drive in the luxury saloon class, but that bar was already set very low and the BMW doesn’t raise it by much. 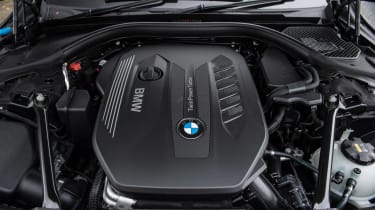 The new 7-series has some incredibly cutting-edge technology, which on paper, should deliver a car that masks its size and offers dynamics on a level with something much smaller.

Air suspension comes as standard. So to do electro-mechanical anti-roll bars and, with cars that feature the £2450 ‘Executive Drive Pro’, a chassis that works together with GPS data to deliver body control based on the topography of the road ahead.

Combined with BMW’s xDrive four-wheel drive system, the 7-series is an amazingly capable car given its 1755kg kerb weight. Body control, particularly in the Sport or Adaptive driving modes, is way beyond what an S-class could manage.

The car feels taught and controlled, with high grip levels and a front end that does its best to hold on before the car’s weight pushes it past the apex.

Where the 7-series’ dynamics fall down is with the steering. In short, it’s far too numb, even when the car is set to Sport mode. Feedback is virtually non-existent, making hustling the 7 Series along at any sort of proper pace slightly intimidating. It’s frustrating, as the capability is clearly there.

Dial everything back though and the 7-series starts to make more sense. Rather than a true drivers’ car, BMW has set out to make a car to be driven in, with only a brief glance at the tablet-daubed rear seats being more than enough evidence of that fact. While some will seek the leather-filled opulence of an S-class, we actually think the more pared-back yet premium approach of the 7-series is appealing in itself.

Either way, ride and refinement are of the highest order. Motorway cruises in particular are incredibly serene, particularly when you take advantage of the 7-series’ incredibly advanced radar-based cruise control.

The ride, in Comfort+ mode, is much improved over the previous car and can compete with the absolute best on offer right now, including even the likes of a Bentley Mulsanne. The Mercedes S-class still leads the way in ride and refinement however.

All the tech can be a little overwhelming initially, particularly as there are just so many different ways to interact with iDrive; tablets, gestures, touch screens and a click wheel. But once you get used to it, it just adds to the experience.

What then has BMW set out to achieve with its new 7-series? To have a class leading technology showcase that can compete with the best of them. It’s just a little sad that some of that driver-centric approach BMW takes has been lost. 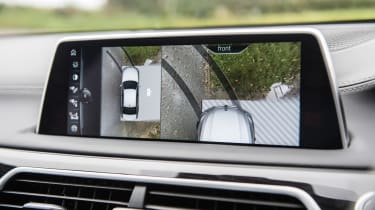 The key 7-series rival is of course the Mercedes-Benz S-class. Despite being more expensive at £68,870, and offering a little less standard kit, its feeling of luxury and quality cabin elevate its talents and it bests the 7-series on all but dynamics.

The Audi A8 is also worth a look, less overtly luxurious than the Mercedes and less technologically advanced than the BMW, but possessed of its own lightweight technology – aluminium in this case – and a £63,520 starting point, a mere £10 less than a base 7-series. Don't spend it all at once...

It’s a matter of taste, but some will find the interior in the 7-series a touch classier than that of the Mercedes, trading opulence for modernity and technology. At £63,530 for the entry-level 730d, BMW’s offering splits its German rivals and undoubtedly offers a lot of car for the money.

Standard kit includes heated seats all round, massage functionality, class-leading tech in the form of iDrive and LED headlights. Desirable options such as gesture control, laser headlights and rear seat entertainment are all optional, but after extended experience to the first of those in our long-term 7-series, we'd steer clear. Until the technology is refined, it requires rather too much arm-waving when iDrive or voice controls are so effective.