BMW's electric small car launches in 2013. Meet the titchy but tech-filled i3 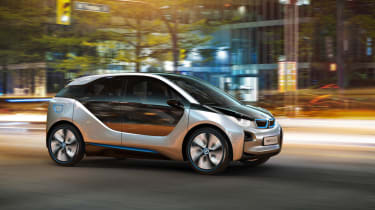 BMW has released details of its innovative i3 Concept. Driven by either electric power or a ‘range extended’ system (featuring a small petrol motor) it is aimed squarely at the urban commuter. A cabin full of renewable materials, and a torquey electric motor offer an interesting proposition.            The i3 has been designed from the ground up as an electric car and this has expunged many of the problems associated with adapting an existing chassis. Rolls-Royce Phantom-style suicide doors are employed to ease access for four passengers.  The moniker LifeDrive is used to describe the lightweight design which BMW hopes will endow the i3 with excellent dynamics and a 100-mile range to lengthen travel between charges.  A low slung slab-like battery sits between the axles of the mainly aluminum chassis. As in the BMW i8, CFRP (carbonfibre reinforced plastic) will be used extensively. This means the i3 will weigh only 1270kg, a useful 250kg less than the Nissan Leaf. Located over the rear axle, the electric motor produces 168bhp and 184lb ft of torque, enabling a 0-60mph-time below 8 seconds. Perhaps more relevant is a sub-4sec 0-37mph time, which alongside a small turning circle, should make the i3 a nifty urban companion. While the electric-only version should cover 100 miles between charges, the ‘range extended’ version will be good for 200 miles. It features a twin-cylinder petrol engine that runs at a fixed speed in order to recharge the battery. BMW accepts the challenge posed by a scarcity of charging points, developing smart phone technology that flags up nearby charging stations while providing information on the vehicle’s status. When the production i3 goes on sale in 2013 it will be priced at around £36,000, £5K more than a Nissan LEAF, maintaining BMW’s market position as a premium brand.