BMW has released a raft of performance upgrades for the BMW M2 Competition. 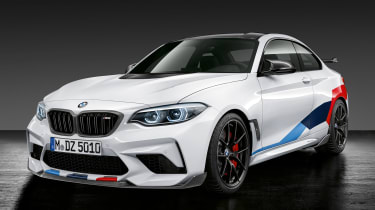 Just weeks after revealing the BMW M2 Competition, the Bavarian manufacturer has issued a list of M Performance parts for its forthcoming junior M-car. Among them are a host of running gear-based upgrades and carbonfibre-inspired, weight-saving touches offering the M2 Competition a more track-bias edge. However, the engine has been left untouched.

An adjustable suspension package comprises one of the major upgrades. You can tinker with the ride height and lower the car by up to 20mm, and configure the dampers through 12 settings of compression and 16 of rebound. BMW claims the focused suspension emphasises the car’s natural, neutral balance and reduces roll, both improving overall driving dynamics.

Lightweight forged wheels, available in Jet Black matt or Frozen Gold, contribute to a 3.2kg saving of unsprung mass in conjunction with a lighter, big-brake set-up. Extra stopping power comes courtesy of larger ventilated discs and aluminium calipers; six-piston at the front and four-piston at the rear. 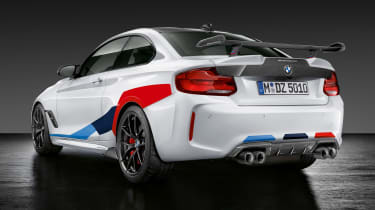 According to BMW, the brakes better withstand hard usage, and hence higher temperatures, due to improved thermal efficiency. To best harness the higher-specification wheel and brake combination, BMW has included Michelin’s track-oriented Cup 2 tyres on the Performance parts list.

Elsewhere, an M Performance exhaust brings a motosport-influenced note to the BMW M2 Competition. The stainless steel system features a titanium silencer and carbon tailpipes, saving 8kg on the standard-fit equipment. In the cabin you can tune the exhaust note through the variety of driving modes, too.

To augment the aural distinction from the standard car, M2 Competition owners can pick from a collection of carbon body parts to build a unique aesthetic. Optional parts woven from the lightweight material include the bonnet, roof and boot; the full complement shaves 20kg off the total kerb weight.

Further exterior use of carbon extends to the aero package consisting of the front splitter, side skirts, rear diffuser, air outlets aft of the front wheelarches, and the prominent rear wing.

Carbon also weaves its way into the Competition's cabin, where it shares trimming duties with Alcantara. As for the controls, there's a choice between two steering wheels – Pro and M Performance. More conventional, the former is leather-wrapped with Alcantara grip areas strategically located, while the latter, a combination of carbon and Alcantara, features a digital display relaying information such as acceleration G-forces and lap times, while there's a gear shift indicator, too.

No prices for the parts have been disclosed.