With a proper BMW Motorsport engine, this could be the compact M-car we've been waiting for 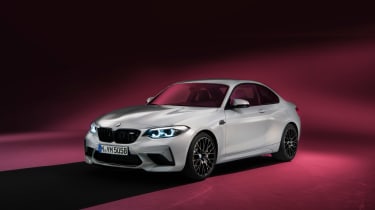 Two doors, compact proportions, blistered bodywork. Sound familiar? It should - it’s been the visual recipe for BMW Motorsport’s compact road-racers since the E30 M3 (and the 2002 Turbo before that).

It’s a recipe that the BMW M2 revived in 2016 following a short hiatus, but one key ingredient was missing: a true Motorsport engine. There’s no doubt the M2 was an appealing car (if not a faultless one) but for all its rowdy road and track behaviour and stocky stance it never quite felt like the naughty exercise in back-room engineering that its 1M predecessor had.

> Click here for our review of the standard BMW M2

No longer: BMW’s new M2 Competition is arguably the car the M2 should have been from the start. There’s a sense, poring over the car’s details in the studio and jotting down all the changes, that this is the car the engineers wanted to build all along, squeezing as much M4 into the 2-series’ compact form as possible. 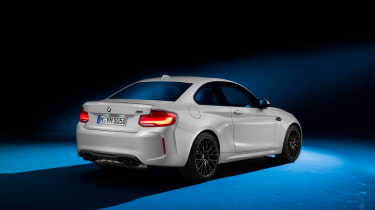 Consider this then the true spiritual successor to those 2002 Turbos, E30 M3s and 1M Coupes. Something to worry the brains behind Audi’s RS3 and the next Mercedes-AMG A45, too - something we’ll find out later in the year. In the meantime, here’s what we’ve learned about 2018’s most exciting M car - and all for £47,260.

Finally, the M2 has been granted a proper M engine. The previous N55 (effectively a revised version of the engine from the old M135i) makes way for the 2979cc S55 straight-six from the M3 and M4, equipped with a pair of turbochargers in place of the old M2’s single, twin-scroll unit, and the full cooling and oil supply systems of the bigger M cars.

As a result, power climbs significantly from 365bhp to 404bhp, with torque ramping up to 406lb ft (from 2350-5250rpm) from a previous high of 369lb ft. Less than an M4 (for obvious reasons) but still plenty in context of its rivals. A six-into-two exhaust system runs underneath the car (switchable as standard), and incorporates a petrol particulate filter to meet upcoming EU emissions legislation. “We see regulations more as a challenge than a threat”, explains M chief Frank van Meel. 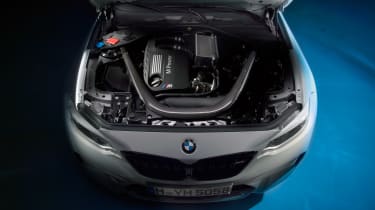 You can thank American customers for the M2 Competition’s standard manual gearbox - America is the car’s biggest market (with the UK and Germany completing the podium) and over there more than half of M2 customers opted for the stick-shift, against around 30 per cent for M2 buyers overall.

A seven-speed twin-clutch remains optional though, and cuts two tenths from the manual’s 4.4-second 0-62mph sprint. Power is sent through BMW’s standard Active M differential, a variable limited-slip differential that takes account of throttle input, driving speed, lateral acceleration and yaw rates as well as torque and differential speed. ESP settings have been revised to take account of the car’s newfound agility. 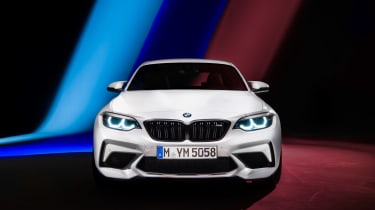 M3 and M4 influence takes hold further under the M2’s skin - beyond the front and rear axles already shared among all three cars. Lift the bonnet and you’ll see the first clue in the large (but only 1.5kg) carbonfibre strut brace spanning the engine bay. Another brace against the bulkhead further stiffens the chassis, while at the rear the M division has used ball joints in the suspension for greater stiffness and precision.

Surprisingly, spring and damper rates are unchanged - van Meel said he wanted to improve precision without sacrificing comfort. Dampers are passive - ‘the car doesn’t need adaptive dampers’, according to van Meel - but cost is also a factor. 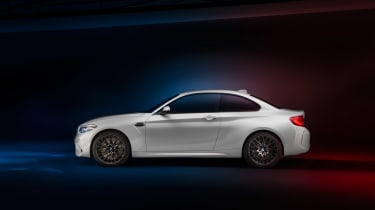 The Competition matches the outgoing standard M2, with bulging arches that add 55mm to the front of a standard 2-series and a delectable 80mm at the rear. Weight has gone up to 1550kg from 1495kg (the new engine requires extra cooling).

The new front bumper and redesigned kidney grille (in shadowline black gloss) are a clue to those cooling requirements, providing extra air for the radiator, oil cooler and brakes. The eagle-eyed will also note that the Competition finally features traditional M mirror caps, here by popular demand - the standard M2 made do with regular 2-series mirrors.

Unlike the M3 and M4, there’s no carbonfibre roof - it’d push the cost too high. Two new colours are available - the Hockenheim silver seen here, and a vibrant, 1M-style orange. 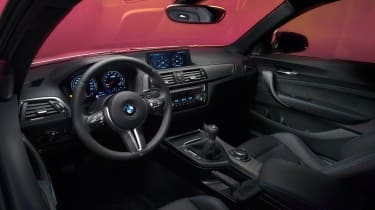 Those hoping for a bit of visual drama may leave disappointed, but the M2 Competition’s changes are welcome all the same. The steering wheel is standard M3 and M4 fare, and feels just right in the hands - slimmer than even the M240i’s rim but still chunky enough to fill the palms.

Notable are the addition of “M1” and “M2” buttons on the left spoke, like the larger M cars, used to store the driver’s preferred vehicle settings. Those settings now match the other M cars too rather than being derived from standard BMWs - you can adjust steering and throttle response via buttons on the centre console (though there’s no damper button). M sports seats - featuring an illuminated M2 logo in the backrests - are optionally available.

Wheel and tyre sizes match the outgoing M2, which means 19-inch diameter wheels front and rear, wrapped in mildly staggered tyre sizes of 245/35 R19 and 265/35 R19. Michelin Pilot Super Sport rubber is standard, though customers will be able to select other tyres from the catalogue of optional M parts.

There’s a new wheel design for the M2 Competition, but drivers looking to fly under the radar can opt for a five-spoke design like that of the regular M2. Standard brakes are 380mm with four-pot calipers up front and 370mm with two-piston calipers astern, but the optional track brakes are worth a look: Six-piston calipers clamp the massive 400mm front rotors, with 380mm discs and four-pot calipers at the rear. Carbon-ceramics are unavailable due to the car’s price point. 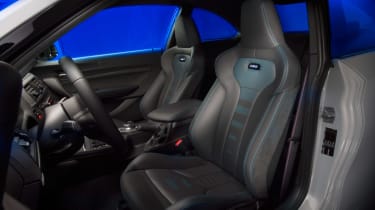 Let’s make this clear from the start: This is not the BMW M2 “Comp Pack”. So much has changed that BMW wants to distinguish it from a simple upgrade pack, so M2 Competition it is. That, and the regular M2 is no more - the Competition, M3 engine and all, effectively replaces it in BMW’s model range.

With only a minimal price increase expected, the M2 Competition is shaping up to be a hugely exciting performance car. On-paper performance is M4-matching but will surely feel even more dramatic with the 2-series’ smaller body shrink-wrapped around you, and BMW M has clearly learned from lessons with the M3 and M4 competition package and CS models and endowed the M2 with a chassis even better suited to containing its new outputs.

It’s a shame weight has increased - an unavoidable side-effect of the new engine, and the M2’s price point means significant weight-reduction measures would be too expensive - but the chassis changes should result in a sharper and more agile drive regardless. Some customers will naturally gravitate towards BMW Motorsport’s more potent options, but for driving thrills? This could be one to watch out for when it lands later this year.