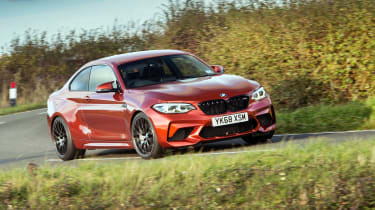 Until recently the M2 made do with the engine from the old M235i, albeit with a smattering of M3 and M4 components as well as a few bespoke parts. In many ways it was the weak link in the M2’s otherwise impressive strong chain, denying the car true M car status. However, that’s all changed with the Competition, which gets the same S55 twin turbo charged unit as the M3 and M4.

To gain some extra power over the M235i, the old M2 had a larger intercooler and used the pistons and forged crankshaft from the M3/4. It also had a modified sump, to help cope with the higher g-forces on track.

At 365bhp it sat in the middle, in terms of power, between the M240i (the replacement for the M235i) with 335bhp and the M3/4 with 425bhp. The engine’s behavior slotted into the same hierarchy, too; it wasn’t as brutal as the M3 and M4’s ‘six and it didn’t chase round to the red line in such an aggressive and enthusiastic manner. However it was smoother, more linear and more predictable, while still being wilder than the conventional motor in the M240i.

There are two gearboxes available on the M2: a six-speed manual and a seven-speed dual-clutch transmission. The contrast between the two is marked, while the manual allows complete involvement and further access to the manageable handling, the DCT feels like a blunt instrument. In Sport and Sport Plus driving modes, the semi-auto hammers each gear home with such force the rear tyres can barely cope. At full throttle, as one clutch reengages the drivetrain the rear wheels jolt causing the car to wiggle from the back. The extra ratio seems unnecessary too; the torquey six-cylinder is more than capable with just six gears.