The Porsche Macan takes on the BMW M3 on the drag strip. Which everyday performance car is quicker? 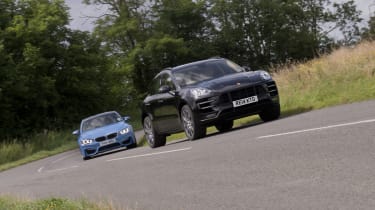 Porsche Macan v BMW M3 – it may not seem like a direct comparison, but their target buyers may be a lot more closely aligned than you think. Both have around 400bhp, come from carmakers rich in heritage and possess five seats and genuinely useable practicality.

The BMW M3 is the saloon sibling to the new M4 coupe. While the old M3 coupe and saloon used a naturally aspirated V8 engine, the new version has downsized, with a twin-turbocharged 3-litre straight-six powering the rear axle. Its peak outputs are 425bhp and 406lb ft, enough to shuffle the M3’s 1523kg from 0-60 in 4.3sec, or 4.1sec if you opt for the seven-speed twin-clutch gearbox fitted to the car in this drag race (a good old six-speed manual is still available).

While ‘M3’ is a badge with huge appeal, ‘Macan’ certainly can’t get close to competing with it. But Porsche’s bigger SUV, the Cayenne, has been a phenomenal success for the company, and a smaller model to battle the Audi Q5 and Range Rover Evoque therefore appears to be a no-brainer for money-making purposes. The good news for us is that this is easily one of the most fun and focused crossover-style models on sale, and while a tall-riding 4x4 may not seem like a natural M3 rival, the mix of performance and practicality it offers is in a very similar vein.

This Macan Turbo, like the M3, uses a twin-turbocharged six-cylinder engine, though it’s 3.6 litres in size and a little down on power, with 394bhp, albeit an identical 406lb ft torque figure. The Macan is considerably heavier at 1925kg, making its dash to 60mph half a second slower at 4.8sec, though its 165mph top speed tops the M3’s limited 155mph. But can its four-wheel-drive traction cancel out its performance deficit and hand it drag race victory? The video above reveals all…