Can the new 2018 BMW M5 retain the supersaloon crown?

The BMW M5 has gone all-wheel drive for the first time in the model’s history. 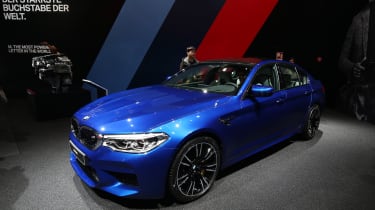 The sixth generation BMW M5 debuted on home soil at the 2017 Frankfurt motor show. Codenamed the F90, the new 592bhp supersaloon lands in showrooms in February 2018 priced from £89,640.

The new BMW M5 represents a big departure from its illustrious lineage: the ever-present rear-drive platform has been dropped in favour of all-wheel drive. While this move may bring anguish to many diehard fans, BMW hasn't done away with rear-wheel drive altogether. Like on the Mercedes-AMG E63 S, exclusively rear-wheel drive functionality is possible, although selecting it in the M5 means engaging the car’s ‘2WD mode’ and forgoing any stability or traction control assistance.

> Click here for our preview drive of the new BMW M5

The new M5 is powered by the 4.4-litre twin-turbo V8 lifted from the previous (F10) M5. It has been revised to develop 592bhp and 553lb ft of torque, 40bhp and 52lb ft more than id did in the F10. The turbochargers, as well as the lubrication and cooling systems have been updated, and the fuel injection pressure has been increased to 350 bar.

The drivetrain has plenty of surprises, combining the M xDrive, four-wheel drive system with a eight-speed torque converter as opposed to a twin-clutch transmission like the one that featured in the F10. BMW has justified the change claiming there’s no loss of performance, but gains in everyday refinement. 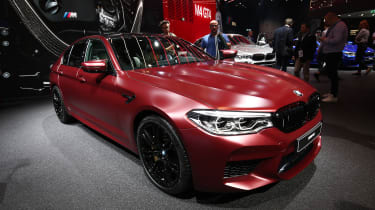 The BMW M5 model line could only resist the performance merits of all-wheel drive for so long. The changeover has improved traction significantly, helping the M5 launch from 0-62mph in 3.4sec, almost a full second faster than its predecessor. Keep the accelerator pinned from there and you’ll see 124mph after 11.1sec, shortly before running into the (limited) top speed of 155mph.

Such figures unsurprisingly place the new M5 right up alongside its arch enemy, the Mercedes-AMG E63 S. The Mercedes boasts 604bhp and 627lb ft of torque, although it does tip the scales at a portly 1,955kg, some 100kg heavier than the M5 is expected to be thanks to weight saving measures. The M5’s bonnet and front wings are constructed using aluminum, while the roof is made out of a carbonfibre reinforced polymer.

Naturally, the chassis has been thoroughly upgraded, too, with firmer springs, dampers and anti-roll bars. There will be no shortage of setup options and driving modes with the new M5, as might be expected: the Drivelogic control of the gearbox offers three settings, with manual control via the gear selector and steering wheel paddles, plus there are three settings for the engine, steering and chassis in the usual fashion. Preferred setups can be saved under M1 and M2 programmes, accessible via the steering wheel. 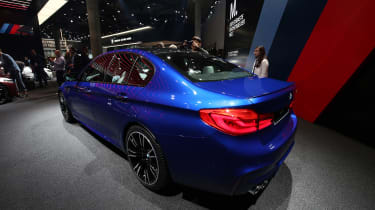 The M5’s body is pumped up in the manner we’ve come to expect of a big M saloon, while wheels are bi-colour cast 20-inch items, shod with a 275/35 tyre on the front axle and a 285/30 on the rear. Black wheels are a cost option. Inside there are new M Multifunctional seats, a red starter button and a head-up display amongst numerous items of standard and optional equipment.

We’ll get a proper go sometime in November, with customers receiving cars early next year, but with the also all-wheel drive Mercedes-AMG E63 S and Porsche Panamera Turbo currently ruling the supersaloon class, the BMW M5 will need to be pretty special to clearly shine through