European buyers have been denied a manual version of the M5 since 2003, but it's still on sale in the USA. We drive the latest 'F10' BMW M5 manual. 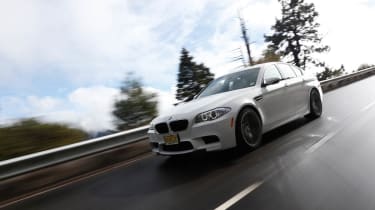 Something slightly different – a manual version of the current ‘F10’ BMW M5.

Europeans have been denied a do-it-yourself gearbox in the M5 since the death of the ‘E39’ generation, back in 2003. But in America a sizeable minority of buyers demand their sports sedans come with a clutch pedal, and hence both this and the previous ‘E60’ generation M5 have been offered with US-only manual variants. We drove it in California and Nevada – there are no plans to bring it to the UK.

It’s fair to say that BMW hasn’t invested a huge amount of effort in engineering the manual M5. It gets the six-speed manual ‘box from the 550i and a heavier-duty clutch. The final drive is identical to the seven-speed twin-clutch DCT M5, meaning slightly higher intermediate ratios. BMW claims the manual is only 0.1-sec slower to 60mph than the DCT – 4.3 secs against 4.2. But it’s fair to say that getting the car to deliver those numbers will mean living with the pungent aroma of burning friction plate.

Apart from the ‘box and the unfamiliar sight of the gear lever in the M5’s button-filled cabin, the stick-shifter is identical to the twin-clutcher. Meaning that, with the same 552bhp output, it’s the most powerful production manual saloon in the world.

Surprisingly different. The gearbox brings out a very different side to the M5, and although it reveals a few fairly significant flaws, it also gives the car a character that the tech-laden DCT car sometimes lacks.

The clutch is heavy and the biting point is abrupt, but once you get used to that the gearbox shifts as sweetly as any other BMW manual. On downchanges there’s an automated throttle blipper to try and match road- and engine speeds; it works well when asked to deal with ‘big’ downchanges – shifting into second for a tight corner – but feels a bit lumpy trying to add a couple of hundred rpm at everyday speeds.

But the biggest surprise is the way the gearbox reveals how laggy the twin-turbocharged V8 engine is at low revs. The DCT M5 responds almost instantly, with the gearbox kicking it into life when you need instant progress. But with less than about 2500rpm showing on the tacho the manual needs the best part of a second to build up steam. Add revs and the problem disappears – with the engine spinning above 4000rpm responses are as quick as those of the DCT.

On some of California’s twistier roads the gearbox quickly proved itself to be this M5’s defining dynamic characteristic. The DCT box is so effortless that, even in manual mode, it never requires more mental effort than you’d give to shifting gears in a video game. By contrast, the manual M5 makes you think a lot harder about the business of going quickly. It’s a strangely compelling thing.

The manual M5 is a car without direct rivals. The only stick-shifting saloon with anything approaching this level of power is the HSV GTS/ VXR8. And as the BMW is only sold in the US and Canada, the two are never likely to meet.

It’s a glorious anachronism, and we’re glad that it exists.

The six-speed manual box is a zero-cost option in the ‘States, but a large majority of buyers opt for the DCT. Senior BMW insiders have suggested this will be the last manual M5 – there are no plans to offer the M6 or the M6 Gran Coupe with the ‘box – so north American readers should enjoy it while they can.