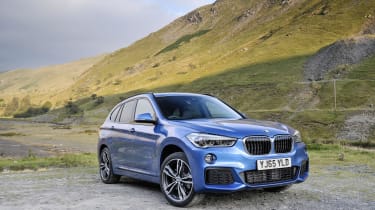 The BMW X1 is one of the best SUVs at disguising its crossover guise by feeling fairly nimble compared to the competition, but it does so at a cost. Utilising the platform of the current Mini and 2 Series Active Tourer is a huge benefit here. Those expecting the soft and cushioned ride of a proper full-fat premium SUV will likely find the X1 a little stiff.

It’s not overly aggressive, but BMW has at least made a nod to its heritage of driving dynamics by keeping the X1 on the sportier side of the spectrum. Don’t for a second think this is Macan levels of exciting however, as the X1 is predominantly designed to be an entry-level premium crossover, not a driver’s car.

Particularly impressive is the car’s stability and lack of bodyroll. It doesn’t have that disconcerting feeling of a high centre of gravity on turn-in and with four-wheel-drive optioned, has good traction out of corners.

BMW has done a lot to try and offer increasing levels of customisation to the X1’s driving experience, not just with the traditional comfort/sport modes, but with different suspension and steering options.

X1 buyers can specify Dynamic Damper Control and Variable Sports Steering, as well as a stiffer and lower M Sport suspension package. Each one tailors the car more towards the sporty or softer side of the spectrum, but in reality the standard setup is more than adequate.

The X1 does a good job of hiding its quasi-SUV size and shape, but still makes some dynamic concessions to the crossover design. A 1 Series will bring more thrills, but the X1 is a far more engaging steer than a lot of the crossover competition and a big step up from its predecessor.