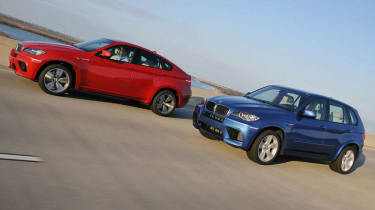 Whilst the popular trend of making hybrid versions of SUV’s gains some momentum, BMW has decided to do the exact opposite with new, more powerful, M-badged versions of the X5 and X6, set to be revealed at this week’s New York motor show.

Both vehicles will get upgraded iterations of the 4.4-litre twin turbocharged V8 that was used in the X6. Power is boosted up to 547bhp and torque is bumped up from 450 to 500 lb ft with BMW claiming that peak torque is available from a mere 1500rpm.

All this means that despite weighing 2380kg the M SUV’s can reach 62mph in 4.7 seconds, that’s the same as a Cayenne Turbo S. The pair are electronically limited to 155mph but if you choose to equip the M Driver’s Package, this rises to 171mph.

Both cars receive a six-speed M automatic transmission, which has full auto and M driving modes, the latter being controlled via steering wheel paddles or the lever. Couple the ability to rev all the way up to the red line with the xDrive AWD function and these cars become blisteringly quick from stand-still.

Having proven themselves on the straights these two will have to carry speed through the corners. BMW hope that the Dynamic Performance Control from the X6 will help keep grip and stability to a maximum and with a weight distribution close to 50:50 cornering performance shouldn’t be an issue.

Knowing that these two will be many an environmentalist’s worst nightmare BMW has done its best to boost efficiency. Efficient Dynamics together with electrical systems that only draw power when they need it means that the SUV’s get a combined consumption of 20.3mpg and 325g/km of CO2; not great, but better than you might expect for nigh on two and a half ton, 547bhp monsters.

As with M-division’s other projects the X5 M AND X6 M get subtle makeovers for a beefier appearance; larger air intakes and two twin exhausts at the rear make for the biggest changes. 20-inch alloys and new M-grills on the side of the car finish off the look. Prices aren’t yet announced, but these two are likely to be a cheaper alternative to the £89,000 Cayenne Turbo S.

Follow the New York motor show on evo.co.uk this week, and we’ll also be Twittering from it, too.