BMW has revealed the updated X5 range, confirming that the M50d model is due on sale later this year. Pictures, specs and prices here 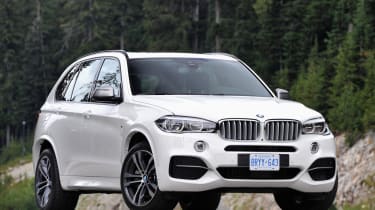 BMW has revealed details of the next-generation BMW X5 M50d, the most powerful of its diesel models, boasting 376bhp and a peak torque figure of 546lb ft.

Although not a full-on M car, the M50d features Adaptive M suspension, and dynamic damper control, as well as standard lightweight 19-inch alloy wheels. There is also the option of Dynamic Performance Control and Dynamic Drive active roll stabilisation.

The tri-turbo engine is carried over from the old X5 and X6 M50d models, although it has received a number of tweaks to make sure it is now EU6 compliant. This means that it is now cleaner and around ten per cent more fuel efficient, despite posting identical power figures, which mans it is still the most powerful in-line six-cylinder diesel engine you can buy.

It retains the eight-speed automatic gearbox. Performance is also improved over the old model, thanks to the new X5’s lighter and more aerodynamic body – meaning a 0-62mph time of 5.3secs.

BMW has also announced a new line of accessories and optional extras for the X5, called ‘Individual Line’, which include new special paint finishes and leather interior colours, as well as even more wheel choice.

Following the launch of the X5, it is set to go on sale in the middle of November.