After a week of exhaustive, enlightening and stirring drives around some of the UK’s most staggering scenery, the 2018 eCoty votes are in, and these are the results:

Let’s be clear: to make the cut for our Car of the Year test should be seen as an achievement in itself, but as in every test, something has to come last, and here it’s the Renault. On these roads, and in this company, the synthetic feedback from its controls and the artificial feel to its agility were its downfall. As we’ve found with Renault Sport Méganes before, this first version of the new-generation car feels as if it has huge potential; there’s a talented chassis waiting to emerge here, but one in need of added focus and calibration to bring its many elements together in a more cohesive fashion. 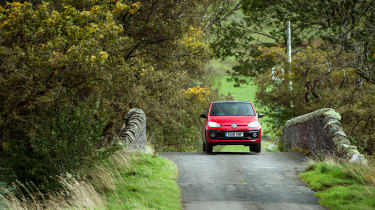 7th – Volkswagen Up GTI (Supermini of the Year)

The same can’t be said of our next finisher, as the Up GTI shows its cards as quickly as it draws them. Its limits are quickly discovered, and frustratingly its stability program can’t be disabled, but its higher placing than the vastly more capable Renault is a mark of just how much sheer fun it is to drive. It is a wonderful supermini, combining a charismatic engine and an enthusiastic chassis in a truly desirable little package. Definitely a car to be celebrated. 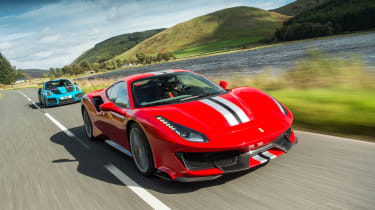 This one may come as a surprise. The 488 Pista is faster, more capable and more technically impressive than any mid-engined V8 Ferrari that has gone before, but it struggles to transform this capability into fun. Its polished overtones and frankly inaccessible outright performance on the public road led to its downfall. What might be seen as a classic case of progress for progress’s sake, the 488 Pista lacks the sparkle that made its direct predecessor, the 458 Speciale, such a high point in Ferrari’s modern back catalogue. The Pista is pure focus, but without a sense of real engagement – something that can’t be overlooked.

A BMW placed higher than a Ferrari? Surely not. But the M2 Competition is the exception here, as it seems to walk the line closest to the very mantra that underpins the BMW brand. It’s flawed, but raw, and aggressive without being terminally intimidating or unpredictable. The manual transmission of our test example, combined with BMW’s stirring S55 engine (borrowed from the larger M3 and M4) and some much needed chassis fettling cemented the Competition’s place. It’s a very impressive sports car, and exactly the kind of modern M-car we’ve been waiting for.

So from 3 litres over six cylinders to 1.5 litres in three, it’s the new Fiesta ST – the car that proved to be this year’s real giant killer. Capable beyond both its rivals and predecessors, the latest ST’s fine touch to all of its elements is what stands out, rather than a collection of highs and lows. It’s a stunning car, one that realigned our expectations of what a simple supermini-sized hatchback is capable of. That the Fiesta ST shone so brightly against the others in this test is a testament to Ford’s skill in creating real-world performance car heroes.