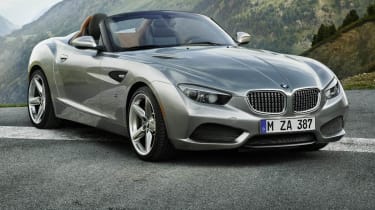 This BMW Zagato Roadster debuted at the weekend’s 2012 Pebble Beach concours event. Under the skin – as its styling suggests – is a BMW Z4 drivetrain, more specifically the sDrive35is model. Its 335bhp straight-six turbo engine is said to be uprated past 400bhp thanks to some exhaust modifications. That should see it hit 60mph in 4.5sec on its way to a top speed of over 170mph, if BMW allows the limiter to be lifted… Like the BMW Zagato Coupe which appeared at May 2012’s Villa d’Este concours, it’s a Zagato-fied Z4 with a number of the coachbuilder’s trademark touches. The front end is bold and sculptured, and the usual BMW kidney grille is now made up of tiny Zagato ‘Z’ logos, and surrounded by matt finish. The 19in five-spoke propeller alloy wheels display a similar finish. The Roadster’s rear end is missing the Kamm Effect aerodynamic design of its Coupe relative, but the cover for the soft-top (noteworthy for its use instead of the regular Z4’s folding hard-top) boasts Zagato’s well known ‘doppia gobba’ double bubbles, which would typically appear on the roof itself. The rear’s black tinted band, which covers the tail lights, gives the Zagato Roadster a wider stance than a standard Z4. The BMW Zagato Roadster apparently made it from design to reality in just six weeks, with its conception coming after the reveal of (and positive reaction to) the Zagato Coupe. Like the hard-top, this Roadster is a one-off only, though unusually for a concept car, it’s fully driveable.