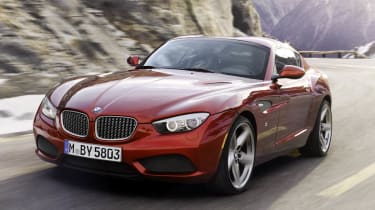 The BMW Zagato Coupe has made its debut at Italy’s Villa d’Este concours event. It’s the Italian styling house's hand built take on what appears to be a BMW Z4 roadster, and the side profile is reminiscent of the previous generation Z4 Coupe.  There is, as you’d expect, a host of Zagato styling flourishes, with the body crafted from aluminum. The roof gets the same double bubble (or ‘doppia gobba’ in Italian) look of other Zags, including the Aston Martin V12 Zagato that won Villa d’Este’s concours competition in 2011. There’s bold contours and sculpting for the bonnet and wheel arches while there’s a sheet of glass on the bootlid rather than metal; the Z4 rear lights underneath it provide another clear hint of what lies beneath. 19in propeller alloy wheels and a Z-badge filled grille complete the exterior highlights, while the interior is very close to a standard Z4, with red stitching and Z badges for the leather seats the main additions. The BMW Zagato Coupe’s reason for existence isn’t just to grab attention visually; BMW says the brief of the car was to be a 'V-max concept'. They describe it as a ‘road-registered aerodynamically optimised machine capable of achieving high speeds yet at the same time meeting all legal requirements and crash-related stipulations’. And while there’s no word on power or performance, BMW’s claim means we’d wager the Zagato Coupe is based on one of the more potent Z4s you can buy, which would mean a turbocharged 3-litre straight-six driving the rear wheels and upwards of 300bhp. The Kamm Effect aerodynamic rear end optimises aerodynamics and negates the need for any kind of rear wing. BMW is no stranger to Villa d’Este – in 2008 it displayed the M1 Hommage concept at the Concorso d’Eleganza, while 2011 saw a similarly retro 328 concept. The Zagato Coupe looks far more production-ready than both, though; whether there’s a limited sales run remains to be seen.