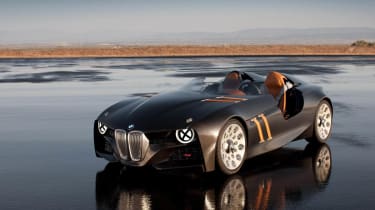 BMW has gone back to the future to celebrate the 75th anniversary of the 328 sports car with its latest concept. Unveiled at the Concorso d'Eleganza Villa d'Este event in Italy, the 328 Hommage harks back to the legendary BMW, which still holds the outright average speed record for the Mille Miglia (103.6mph). With its leather bonnet straps, distinctive wheels and the return of the more traditional, vertical kidney grille, it harks back to the era of its iconic predecessor. A marked absence of doors and a split windscreen are also nods towards the 328 racing car of the mid-1930s, which at 780kg, weighed as much as an early Lotus Elise. The 328 Hommage’s thoroughly modern body is created using carbonfibre-reinforced plastic (CRP), however, and is wholly removed from its thirties forebear, instead pointing the way forward for BMW construction in the future. ‘Even 75 years ago, the BMW 328 stood for sportiness and agility through lightweight construction. The BMW 328 Hommage Car pays tribute to this past and shows how BMW lightweight construction will develop. Carbon is the material of the future,’ confirmed BMW design chief Adrian van Hooydonk. Carbonfiube has already been seen on the roof of the BMW M3 Coupe, but BMW’s CRP construction techniques will be used extensively in the production of the forthcoming i3 electric city car and i8 plug-in hybrid supercar.  Also linking BMW’s future with its present, the 328 Hommage features the company’s 3-litre turbocharged straight six engine. While there aren’t any firm performance figures yet, the unit delivers 335bhp to the rear wheels of the new BMW 1-Series M Coupe. The interior, meanwhile, features a pair of iPhone docks, with the ability to hook up Apple software to provide additional lap timing and GPS navigation functions. The high-tech functions are reminiscent to those found on the BMW Vision ConnectedDrive Roadster and, owing to styling and proportion similarities, the 2011 Geneva show concept appears to have formed the basis of the BMW 328 Hommage.

Learn about the BMW i3 city car and i8 supercar