BMW's all-new supercar is spied out testing in the snow of Sweden. Meet the hybrid i8 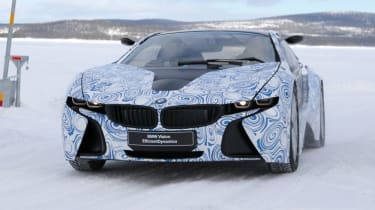 The new BMW supercar has been snapped by spy photographers. Behind rose-tinted specs it’s a modern-day M1, but in truth it’s a very different kind of car. It should usher in the age of the clean supercar, with a hybrid drivetrain linking a small internal combustion engine (BMW has a 1.5-litre three-cylinder petrol unit on the way) and electric motors. No official details are yet available, but rumours suggest the engine will provide around 180bhp, the electric motors 110bhp, and with the latter’s power available from zero revs, a sub-5.0sec 0-60mph time is very plausible. Top speed is likely to be a typically Germanic 155mph (limited), while fuel economy should top 75mpg. The hybrid technology, used alongside BMW’s impressive EfficientDynamics technology, should hopefully see CO2 emissions below 100g/km, enough for free road tax in the UK. Known as the i8, the supercar will sit at the top of BMW’s new i range, the badge under which its electric cars will be sold. Kicking things off will be the all-electric carbonfibre i3 supermini, the boxier car pictured right. The i8 is based on the BMW Vision EfficientDynamics concept from 2009, and is incredibly close both in concept and design. Its gullwing doors and 2+2 seating apparently make production, as does the prevalence of visibility – the glass surface area is large, even the doors being see-through. The concept’s proportions were very similar to a BMW M3’s; hopefully that remains true for the i8. More rumours suggest a regular, petrol-powered version of the supercar, perhaps to help break the i8 onto the market with less risk than making it hybrid-only. If true, that would likely be a traditionally rear-drive BMW; expect the hybrid i8 to be four-wheel drive. The Vision EfficientDynamics concept had electric motors on both front and rear axles, providing power alongside a mid-mounted turbodiesel engine. Sales aren’t expected until 2013, when the BMW i8 supercar should cost around £150,000. With lots of development time still left, a production-ready car probably won’t be seen until 2012.

All the info and pics of BMW's Vision EfficientDynamics