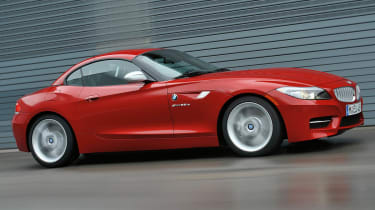 The engine’s not the TwinPower single-turbo six that BMW’s been crowing about in the 5-Series, but the final rework of the glorious twin-turbo straight six. BMW has fiddled the electronics to boost it to 335bhp and 369lb ft of torque. But that’s not all. It can also overboost, and it’s mated to the seven-speed double-clutch gearbox from the M3, even though its shift buttons are ridiculously counter-intuitive.

Now we’re talking. The current Z4 is a great cruiser that could attack the twisty stuff, but doesn’t really want to. The 35iS has turned a solid performer into a very, very good one.

BMW claims that it will punch to 62mph in 4.5 seconds – faster than a Boxster S – and it doesn’t feel far off the money. There are two keys, actually. One is the added throttle response from anywhere in the rev range and the other is the noise and aggression the engine upgrades have given it.

The noise starts quite low in the rev range, but it really hits its stride at around 3500rpm, smoothly building up to a wonderful howl at the redline that you never get tired of listening to.

Crank the gearbox up to its angriest setting and it cracks through each upshift and blips, crackles and burbles its way through each downshift as well. But you have to use the gear lever if you want to do it manually because BMW’s button system is daft (and, thankfully, on its way out after this car).

But while the straight-line punch puts the Boxster in the shade, the electro-hydraulic steering doesn’t - it's still short on natural feel and confidence. The handling is crisper than the stock model, the iS sitting 10mm lower and running stiffer springs and dampers, but the real beauty of this car is its drivetrain. This alone transforms it from a baby GT car into a storming pass-blaster.

The one obvious rival is Porsche’s Boxster S. It’s everybody’s obvious rival because it’s the best of them. While the Z4 has got a touch more pace than the Porsche, and it's drivetrain is every bit as sophisticated, its chassis still isn't there. If you’re looking for a direct match on the driveline, Audi’s TT RS roadster is right about there.

The upcoming 335iS saloons and coupes will also have the dual-clutch gearbox, but it will use proper left-down, right-up shift paddles. Shame BMW didn’t stick 'em on this car first.