Much sharper to drive than before, much more aggressively styled, the Z4 at last has potential to rival a Boxster. 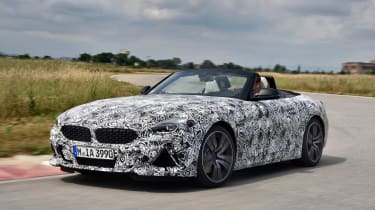 This time, says BMW, the Z4 has become a proper sports car; the sort of car you’d get up early on a Sunday morning to drive. Unlike the previous Z4.

Why the change of heart, and why the admission that the old BMW Z4 was – relative to its successor – such a softie at heart? Three words; the Porsche Boxster.

Having seen sales of the Z4 drop by almost 30 per cent since its birth in 2002, BMW wants a piece of the Boxster’s action, basically, and the only way to achieve this, it reckons, is to build a sports car that’s at least as compelling to drive as a Boxster, hence the far more thrusting dynamics of the new Z4. 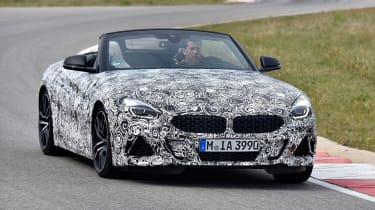 “In every way the new Z4 is a more aggressive car than its predecessor, a more dynamic car” says Andreas Ederer, Product Manager for the new Z4. “Not just to look at but to drive, to listen to, in everything it does.

“But this doesn’t mean its appeal will be narrower” says Ederer, admitting that – Boxster apart – sales across the whole roadster sector have fallen dramatically during the last two decades – to a point where, rumour has it, Audi will not be replacing the TT in 2021 because the market for such cars has shrunk that much during the last 10 years.

Whatever the market’s trend, BMW has thrown the kitchen sink at the new Z4 dynamically. The Z40i prototype driven here gets fundamentally the same 3.0-litre twin-turbocharged straight-six as the M240i, with 340bhp and enough torque to fire it to 62mph from a standing start in under 4.5sec. It also gets the eight-speed ZF auto gearbox with sharper software than in the M240i, an electronically managed differential and bespoke Michelin Pilot Supersport tyres.

When embarking on the Z4 project, Michael Wimbeck, Project Manager for the car and formerly responsible for the M3 and M4’s development, set out by selecting the most driver focussed and powerful non-BMW sports car in the company: the then M235i. However, it soon became apparent that the two-door saloon wasn’t up to scratch in the dynamics, performance and character departments, so he plucked a fleet of M2s from M GmbH and set about making the Z4 as good as an M car.

Those Michelin Pilot Supersport tyres started life as M3/4 tyres: “We wanted to start in a very strong position so we selected the tyres from the M3 and M4 because we knew they would provide us with the feel, grip and precision we were looking for” explained Wimbeck.

Apart from the electronic M differential and the firewall attached to the bulkhead there isn’t a single component carried over from the outgoing Z4, either. “We wanted to build a sports car and to do that we knew we had to start with a clean piece of paper. It’s also why we had to develop the car with a partner so we could design and develop the components required. Partnering with Toyota has allowed us to build the Z4, the market is very small and to do a car to this level on our own would have been very hard (to convince the board)” continued Wimbeck. 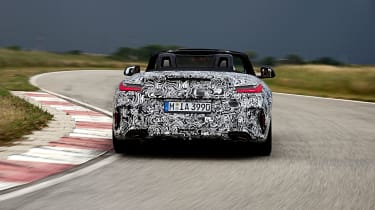 Two key chassis components that Wimbeck and BMW are confident will separate the new Z4 from old are the front and rear axles. The latter is taken from the new BMW 3 Series, the former is a totally bespoke item to the Z4 (and Supra, although Toyota has further developed it for the Supra) and has been designed to eliminate understeer. The 3 Series’ rear axle is designed to provide the agility required of a sports car.

Like the Toyota Supra, the new BMW Z4 has a 50:50 weight distribution (with the BMW four-cylinder engine filling even less space in the engine bay), a low centre of gravity and an incredibly stiff aluminium and steel chassis and body. “The rigidity was key because it allowed us to reach the sport car set up we were aiming for without compromising comfort.

“With a rigid body we are able to soften the damper and spring rates and it provides a wider range between Comfort and Sport in the Dynamic modes. It’s much easy to start with a stiff car and soften it so every kind of driver can enjoy and exploits the car’s performance, than it is to try and make a soft car feel dynamic and like a sports car” explains Wimbeck.

And the results, at this stage, seem pretty convincing from behind the wheel. The Z4 feels MUCH more focused this time round, and is a lot more rewarding to drive generally. In brief, the new Z40i goes hard, makes a better noise than a flat four Boxster, is much more entertaining in its handling, steering and body control than of old, and has a genuinely decent ride. And, to these eyes, which have been given a sneak preview of a totally undisguised car, it looks the business as well.

A credible rival for the Boxster? On this evidence, yes, far more so than the previous Z4, at the very least.