This is our best look yet at BMW’s all-new Z4 Roadster, to be shown in full later this year 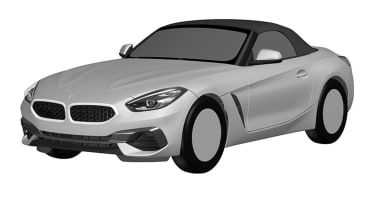 We’ve seen the test mules, the 2017 Z4 Concept, and even driven a pre-production prototype, but these images reveal what the new BMW Z4 Roadster will finally look like when it hits the road early next year.

The images come from the increasingly common patent leak, and it tells us that although the production car doesn’t look to deviate too far from the concept, its overall proportions have definitely been toned down from the low, wide and rakish concept.

> Click here for our prototype drive in the new BMW Z4

It is clear, however, that most of the concept’s detailing will reach the production Z4, including the controversial headlights that for the first time in recent memory drop BMW’s double roundel signature, in a recognisable form anyway. The new clamshell bonnet does tidy up the front fascia, likewise the new kidney grille eschews BMW’s recent design trend of joining them together, with a shape more akin to those on the blobby BMW X2.

Also gone is the Concept’s aggressive ‘sharknose’ profile, an element that was cradled by the floating front splitter that wove in and around the front intakes. Along the car’s flanks, you’ll also see that the dramatic rising hips of the previous two Z4 models have been toned down, here having a more subtle wedge shape informed by the front wheelarch vent and bonnet.

Around to the rear and a pronounced integrated ducktail sits atop the boot opening, but the Z4 Concept’s aggressive rear ducting is replaced with gentle sculpting. BMW’s common l-shaped rear lamps are also present, here in a single unit that has helped keep the rear end relatively clean of panel lines.

As we already knew, the new Z4 will return to a fabric roof, reducing weight, complexity and the packaging compromises associated with folding hard-tops. Inside, expect the latest collection of BMW switchgear, plenty of which will be borrowed from the recently revealed X5. BMW’s new-gen iDrive system will also be included.

Based on prior leaked information, we expect engine and gearbox options to be made up of turbocharged four and six-cylinder petrol engines, paired with either an eight-speed auto or six-speed manual. Although we suspect BMW M’s S55 engine will fit, we can only confirm at this stage that a warm M Performance model is to take care of the sportier end of the range.

Another well known element of the new Z4 is that it will share its basic chassis and powertrains with the long-awaited Toyota Supra. Due to be unveiled in full at the Paris motor show in October, the new Z4 will go into production later in the year, with customer cars reaching showrooms at the beginning of 2019.