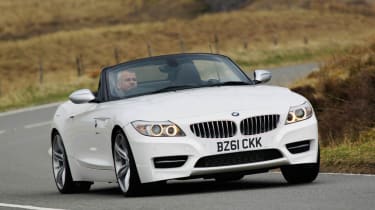 The BMW Z4 sDrive20i, the new entry point into BM roadster ownership. It also brings Z4 prices below the £30,000 mark, setting you back £29,480 before you start piling on the options.

If you plan on stepping into one from a straight-six Z4, then you’ll immediately miss the noise and naturally aspirated power delivery. But this turbo 2.0-litre is not without merit, and makes a rorty (if synthesized) noise towards the top of its rev-range.

Shame, then, that all of its power is delivered by an almost diesel-like 4800rpm and its 199lb ft maximum from a mere 1250rpm. Therefore getting the best from the engine and gathering most pace is via shuffling through the well-weighted shifts of its six-speed gearbox (an eight-speed automatic joins the options list).

That’s not exactly the most enthusiastic way to drive a car like this, but it matches the Z4’s other dynamic facets well: while all of its key controls are positive and feelsome, they aren’t attached to the most playful of chassis, the end result being a driving experience closer to that of a Mercedes SLK than a Porsche Boxster. It’s still good fun, but it’s no hardcore drivers’ car.

The sDrive28i might have more power and torque, but its CO2 and mpg figures are identical to the 20i, so if you can stomach a £4165 higher asking price, you’ll gain a considerable wedge of extra performance.

And while the 20i is £945 cheaper than the 23i it replaces, its kit-count is stronger: leather seats, Bluetooth and a USB connection are among the newly standard equipment.