The BMW Z4 sDrive18i is the German company's entry-level roadster. A posh convertible or a fun sports car? 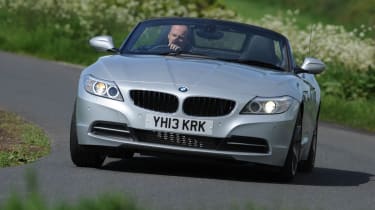 The BMW Z4 sDrive18i, aka the entry point into BMW roadster ownership. Prices start at £27,610.

Sat beneath this base Z4’s bonnet is a 2-litre four-cylinder turbocharged petrol engine, its 154bhp peak horsepower plonking it 29bhp south of the previous entry-level Z4, though its 199lb ft torque figure is identical. Performance comprises a relatively modest 7.9sec 0-62 time and a 137mph top speed. A six-speed manual gearbox is standard, an eight-speed automatic transmission a £1850 option.

Standard equipment includes a DAB digital radio, Bluetooth and Drive Dynamic Control, which allows the steering and stability control (and ride comfort depending on if you’ve specced Adaptive M Sport suspension) to be toggled between Normal, Sport and Sport+ modes, while the Z4’s folding hard-top opens or closes in 20 seconds, and can be operated while on the move.

The good stuff first. The steering, despite its lack of grip level communication, is very well weighted, while the manual gearchange is hugely satisfying to use. Your key touch points with the car are positive to use and instil confidence.

The problem comes when you want to drive this Z4 quickly. First up, it’s not very fast. That’s not a huge issue given its entry-level status, but the engine feels tame and is missing the discernable boost that usually results from turbocharging. It’s brisk enough once you’re up and running, but the rapid acceleration you might crave out of corners or to execute overtakes is missing.

Secondly, it doesn’t really feel like a sports car. If the Z4 sDrive35i struggles to mask its 1.5-ton kerbweight, then this marginally lighter but significantly less powerful 18i was always going to lack agility. Overall, it feels front- rather than rear-wheel drive, and with the back axle unwilling to play a part in cornering, it lacks the adjustability traditional sports car buyers will crave.

Instead, this is a well-turned out convertible – punchily proportioned, nicely trimmed and comfortably riding, it’s a pleasant car to enjoy the sun in rather than one to hike up your pulse.

The Z4’s most natural rival is from its German homeland, the Mercedes SLK offering a similar premium feel and comfort-oriented driving experience as well as a folding hard-top. A 181bhp SLK200 starts at £30,345 and boasts identical economy figures, though sits eight insurance groups higher. If it’s sports car fun you’re hunting, the £21,595, 158bhp Mazda MX-5 2.0i Sport Tech remains top dog, though the Toyota GT86 Convertible looks set to provide a compelling alternative (and a pair of rear seats) from 2014.