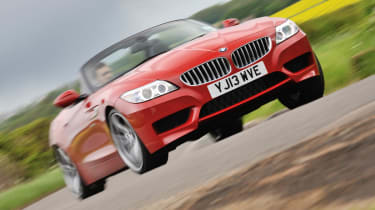 The BMW Z4 sDrive35i, here in M Sport trim and wearing the range’s mid-life facelift. It’s priced from £42,870. It’s not the range-topping Z4, though it is essentially the basis for the 335bhp Z4 sDrive35is, which is only available with a twin-clutch gearbox and commands a £1055 premium over a comparative 35i.

It’s powered by a 3-litre single-turbo straight-six engine good for 302bhp at 5800rpm and 295lb ft at 1300-5000rpm. With the standard six-speed manual ’box, the 35i will do 0-62mph in 5.2sec; opt for the seven-speed twin-clutch paddleshift gearbox and that drops to 5.1sec. Both have an identical (and limited) 155mph top speed. The automatic also serves up more miles per gallon, its 31.4mpg fuel economy a 1.3mpg improvement on the manual.

The Z4’s mid-life update is very slight, with only the most minimal of styling tweaks applied and the retention of everything that makes the regular Z4 so capable at being a plush convertible. Its folding hard-top roof opens up in 20 seconds and can be operated while you’re driving, helping avoid anxiety when rain clouds lie on the horizon.

A DAB digital radio is standard, as is Bluetooth connectivity and Drive Dynamic Control. The latter switches the steering and stability control (and, if you’ve specced Adaptive M Sport suspension, the ride comfort) between Normal, Sport and Sport+ modes.

The Z4 is quick and has superb grip and traction even in dreary summer rain, but it feels sometimes heavy, always clumsy and ultimately disappointing. The good stuff is very good – the six-speed manual ’box is lovely, the brakes bite hard right at the top of the pedal travel but are also progressive, and the engine has a stonking delivery, building from a smooth, insistent response at low revs, through a neck-snapping mid-range, to a high-energy howl towards the limiter. Even the ultimate balance is pretty good, with understeer only evident in slow corners and a predictable transition into oversteer if you go looking for it.

But the muddled ride and body control undermine all of this. In the Drive Performance Control’s Comfort mode (DPC adjusts throttle response, stability control, steering weight and the Adaptive M Sport suspension), the Z4 feels fuzzy-edged, and short, sharp bumps clatter through to the cabin. Sport mode offers a bit more control and precision without sacrificing much in the way of comfort, but when you’re driving the Z4 like a sports car it struggles to pin down its 1505kg. Sport Plus offers decent body control but often sends the wheels skittering around, the frenzied reaction kicking back through the steering. The unyielding damping also makes the Z4 feel unstable during braking on poorly surfaced B-roads.

The manual Z4 sDrive35i is about £1400 less than the 302bhp Mercedes SLK350 AMG Sport, and £3k less than the 311bhp Boxster S. Speaking of the Boxster, the Z4 weighs in at 1505kg, some 185kg heavier than its Weissach rival. Yet the Z4 is so far from the control and suppleness of the Boxster that to compare them at all seems cruel.

Away from the roadsters segment, similar money buys similar power in the shape of the Nissan 370Z Nismo, while if it’s a sporty, satisfying BMW you crave then for little over £30,000 the 316bhp M135i hot hatchback is one of our favourite all-rounders on sale; fast, superbly balanced and with a cool soundtrack, it also returns decent fuel economy, is exceedingly practical and is subtle enough to deflect attention. It’s also 80kg lighter than the Z4.

I happen to think the only-mildly-refreshed Z4 looks terrific. You’ll barely notice the tweaks to the headlight design and the LED-equipped side gills, but it looks fresh and aggressive nonetheless. Inside it’s a quality item, too, and when you grip the chunky steering wheel and peer out over the bonnet rising up and falling away somewhere out of sight, the Z4 feels like a proper sports car.

Otherwise, the sad news (for us, at least) is that despite earlier rumours, fed by none other then M division chief Friedrich Nitschke, there won’t be a successor to the BMW M Roadster and BMW Z4 M. Instead, this slightly blunt 35i (and its slightly more potent 35is sibling) is as sporty as things get. It may be pitched at the comfy SLK rather than the agile Boxster, but there’s still a Mercedes SLK55 AMG…

Instead, alternative versions of the BMW Z4 focus on efficiency, the cheapest of them all being the sDrive18i, its 154bhp 2-litre turbo engine helping it return 41.5mpg while sliding comfortably below £28,000. There are also 181bhp sDrive20i and 241bhp sDrive28i versions of the same engine, which also (officially, at least) serve up the same mpg. Another rumoured roadster – the BMW Z4 diesel – also appears to be dead in the water, despite the appearance of the Mercedes SLK250 CDI.